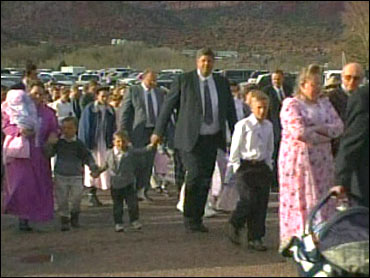 The raid on the polygamist compound in Eldorado, Texas has not only focused public attention on such sects, it's sparked many questions about them.

One such query: Who pays their bills?

A significant part of the answer, according to Early Show national correspondent Hattie Kauffman is -- taxpayers, in the form of welfare.

Kauffman and Laurie Allen, who escaped from polygamy, drove around one such community, in Colorado City, Ariz., and saw many mammoth homes built to accommodate multiple wives and children.

How the man of the house can afford to build such super-sized dwellings! The answer: He can't. He doesn't pay for them, you do.

As Allen explained to Kauffman, "What happens is a man marries one wife, she's his legal wife, then he marries ten other wives in the church, and all the other wives are, by law, single women, so they have all these children with him, and they all get welfare."

The more kids, the bigger the welfare check, Kauffman points out.

"Some of the women in this town have 26 babies," Allen told her.

And the women, Kauffman adds, have no choice. The fundamentalists believe a man needs three wives to get into heaven. And the wives exist for one reason: to make babies.

"On my wedding night, I was raped," another escapee from polygamy, Pam Black, said to Kauffman. She had 13 babies but, she says, "knew nothing about sexuality or intimacy, friendship."

It's been a long road to recovery, Kauffman says. Now free from the sect, Black is building a new life, with a new man who is able to show her tenderness.

Black says she got away just in time. "They were trying to set me up so they could put the handcuffs on me, and take me away," she said tearfully, " ... because they don't want women here who think for themselves."

Though shunned by the town's residents, Black has refused to move away.

A stillborn daughter is buried in the religious sect's graveyard for babies.

"It's cruel here, what people do," Black remarked.

The religious group teaches that both laughter and tears come from evil spirits, Kauffman says.

"People's feelings are shut down and they can't feel," Black cried. "They just like, go around like a zombie."

"It's OK to feel, it's OK to cry," Kauffman reassured Black.

"Yes!" Black agreed. "I encourage everyone to feel to the fullest!"

"If your heart is filled with sorrow," Soaring Hawk advised, "then feel it to the depth. And then walk through it."