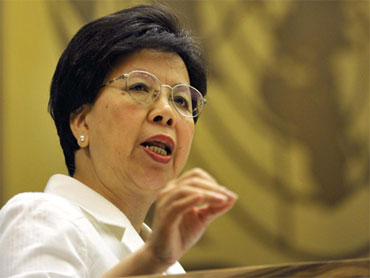 Many more people could become sick with H1N1 (swine) flu this winter even though it has peaked in North America and some European countries, the head of the World Health Organization said Tuesday.

The worst of the H1N1 flu outbreak is over in the United States, Canada, Britain and some other countries in the northern hemisphere, said Dr. Margaret Chan.

But there is still intensive flu activity in Egypt, India and elsewhere, she said.

"It is too premature and too early for us to say we have come to an end of the pandemic influenza worldwide," Chan told reporters. Health experts should monitor the pandemic for another six to 12 months, she said, adding that the virus could still mutate and become more dangerous.

Photos: Epidemics of the Decade

Over 11,500 people are known to have died from the disease since the outbreak began in April, according to WHO. Between 250,000 and 500,000 people die from regular flu each year.

When the U.N. health agency declared H1N1 flu to be a pandemic in June, it described it as "moderate."

While most people recover from the illness without needing medical treatment, officials are also continuing to see severe cases in people under 65 - people who are not usually at risk during regular flu seasons.

As many countries have rolled out massive H1N1 flu vaccination programs, demand for swine flu shots in some European countries has been lower than expected, said Chan.

WHO is talking to these governments to see if superfluous vaccines can be shipped to developing countries, she said.

The agency has warned that the virus could have a devastating impact in countries across Africa with high numbers of people with health problems like malnutrition, AIDS, and malaria.

Drug makers and countries have promised to donate nearly 190 million doses of vaccines to WHO, she said. The figure is up from about 150 million doses two months ago.

Chan acknowledged she had yet to get her own H1N1 flu shot. Only just back from leave, she said she asked her medical service to find out where she can get vaccinated.

"One thing we need to guard against is the sense of complacency," Chan said, adding that flu viruses are highly unpredictable.

"We will watch this virus with eagle's eyes," she said.

Last month, WHO warned that with fresh bird flu cases reported in poultry in Egypt, Indonesia, Thailand and Vietnam, the risk of bird flu and the H1N1 pandemic swine flu virus mixing was heightened.

Scientists fear that bird flu, which remains hard for people to catch but kills about 60 percent of those infected, could combine with the current swine flu virus, which spreads easily among people but kills a low percentage.

Chan said although countries are now better prepared to cope with a global disease outbreak than a few years ago, the swine flu epidemic has shown that there remain numerous gaps in the health systems of many countries.

She said she hopes the world can avoid a pandemic triggered by the avian flu virus, which she said was more toxic and deadly than swine flu.

"The world is not ready for a pandemic caused by H5N1," she said, referring to the scientific name of bird flu.