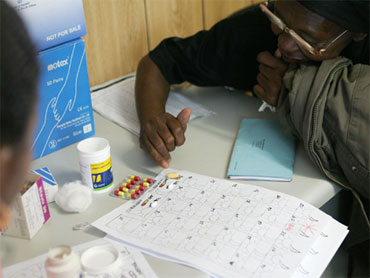 Between 2003 and 2010, the number of patients receiving lifesaving antiretroviral treatment increased twelve-fold, according to the Geneva-based body.

"We are very encouraged by this increase. It is indeed the biggest increase that we have seen in any single year," said Gottfried Hirnschall, director of the WHO's HIV/AIDS department.

Hirnschall, in an interview with The Associated Press, said the jump was due to improved access to treatment around the globe, especially in sub-Saharan Africa.

"That's obviously where the greatest need in terms of numbers is, but that's really where we have seen the most impressive scale-up in terms of treatment access," Hirnschall said.

WHO presented the new data at an international AIDS conference in the Austrian capital attended by thousands of experts and advocates.

Clinton, in a keynote speech, acknowledged the increase but also put it into context.

"Five million people on treatment is a lot compared to where we started - but still a third of those who need treatment today," the former American president said. "We cannot get to the end of this epidemic without both more money and real changes in the way we spend it."

In Eastern Europe, meanwhile, there are proportionally fewer people on treatment than in other parts of the world because drug users often are not included or given sufficient access, he said.

While in Africa AIDS is a mainly heterosexual epidemic, in Eastern Europe a lot of the infection occurs among drug users, he noted.

Complete statistics on the global situation will be released in a report in September.

The aid group Medecins Sans Frontieres (Doctors Without Borders) welcomed news of the upswing in people receiving treatment but warned that future progress could be impeded by insufficient funding.

"The big worry right now is that this upward movement could be interrupted," said Tido von Schoen-Angerer, who heads the group's campaign for access to essential medicines. "We can't turn back now."

Von Schoen-Angerer said there already were signs of funding woes, with clinics in Uganda being forced to turn away patients.

"There's a fear we'll see this at a greater scale," he said.