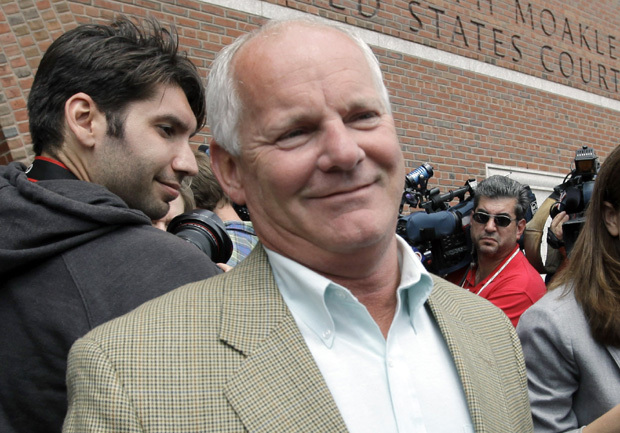 (CBS/AP) WOBURN, Mass. - Stephen Rakes, a man who said he had been extorted by James "Whitey" Bulger and hoped to testify at his trial, was given iced coffee laced with cyanide that killed him, authorities said Friday, and a Massachusetts man was charged with attempted murder in his death.

The poisoning was apparently unrelated to the case of reputed gangster Bulger, though the body of the potential witness, Stephen Rakes, was found July 17 in the woods in suburban Boston the day after he learned he would not be called to testify.

Camuti pleaded not guilty to the charge and was being held without bail until a hearing Tuesday. A message seeking comment was left with his attorney.

A murder charge has not been filed because the medical examiner is still waiting for test results.

Prosecutors say Rakes and his former wife were forced to sell Bulger their South Boston liquor store in 1984 to use as a headquarters for his gang. Bulger once ran Boston's feared Winter Hill Gang before being tipped off that he was about to be arrested and fleeing the city. He was captured in California two years ago and brought back to Massachusetts, where he is accused of participating in 19 murders.

Rakes had looked forward to testifying at Bulger's trial but learned the day before his body was found that prosecutors wouldn't call him.

Ryan said surveillance video from the Joseph Moakley Federal Courthouse, where the Bulger trial is being held, showed Rakes leaving that day after attending as he had been every day. He was wearing the same clothing when he was found in the woods with no identification, keys or cellphone.

Camuti and Rakes were business associates who had known each other for years and were involved in various deals.

Ryan says Camuti asked Rakes to meet him July 16 to discuss a potential investment property, but the deal was fake. They met at a McDonald's in Waltham and Camuti allegedly bought two iced coffees, adding two teaspoons of potassium cyanide to one and giving it to Rakes, who drank it. She said investigators found he had made inquiries online about buying cyanide.

Ryan said Camuti drove around for hours with Rakes in the car, then dumped his body in Lincoln.

Steve Davis, the brother of one of Bulger's alleged murder victims, called Rakes' death a sad situation. The two met and became good friends two years ago, after Bulger was apprehended in California.

"It's sad, the guy was full of life," Davis said. "He was happy. He had two grandchildren who he always talked about."