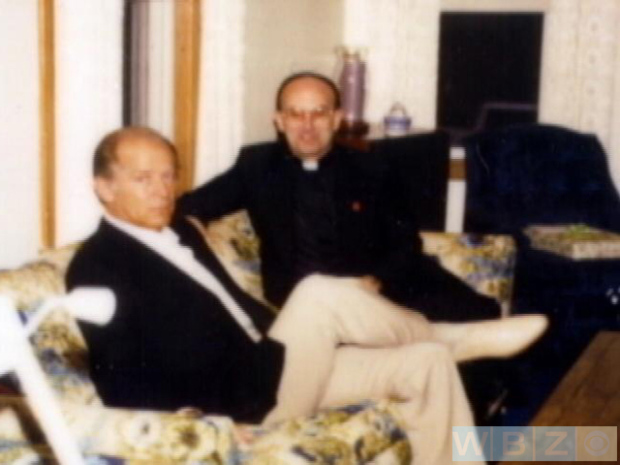 (CBS/AP) BOSTON - James "Whitey" Bulger's defense team released photographs Wednesday in an attempt to show the reputed mob boss' softer side, but in one, he is pictured next to a priest who was later defrocked for allegedly sexually abusing teenage boys in the 1980s.

The photo shows Bulger sitting on a couch with Rev. Frederick Ryan who would eventually become vice chancellor of the Boston archdiocese. Ryan was defrocked in 2006 after accusations surfaced that the sexually abused teenage boys in the 1980s who attended a Catholic high school he served as chaplain at.

While it's unclear what relation Ryan had to Bulger, Boston attorney Mitchell Gagabedian, who represented two former Catholic Memorial High School students who successfully sued the archdiocese in 2002 over the abuse, said the relationship between the priest and reputed mob boss doesn't come as a shock.

"Given Whitey Bulger's lack of respect for humanity, it comes as no surprise that Whitey Bulger is associated with a serial pedophile such as Fred Ryan," Garabedian told Boston.com.

In other photos released Wednesday night by the defense, Bulger is seen cuddling with animals, vacationing, posing with a former girlfriend, and even building a dollhouse.

Prosecutor Fred Wyshak complained to the judge Thursday, saying Bulger was trying to salvage his public reputation by showing himself "holding all sorts of animals," including dogs, parrots and a goat.

Bulger's lawyers still have not said whether Bulger will testify. The 83-year-old is currently on trial and is charged with playing a role in 19 killings.