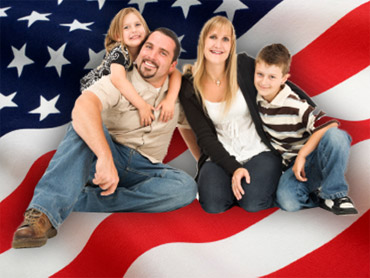 Minorities make up nearly half the children born in the U.S., part of a historic trend in which minorities are expected to become the U.S. majority over the next 40 years.

The numbers are growing because immigration to the U.S. has boosted the number of Hispanic women in their prime childbearing years. Minorities made up 48 percent of U.S. children born in 2008, the latest census estimates available, compared to 37 percent in 1990.

"Census projections suggest America may become a minority-majority country by the middle of the century. For America's children, the future is now," said Kenneth Johnson, a sociology professor at the University of New Hampshire who researched many of the racial trends in a paper being released Wednesday.

Johnson explained there are now more Hispanic women of prime childbearing age who tend to have more children than women of other races. More white women are waiting until they are older to have children, but it is not yet known whether that will have a noticeable effect on the current trend of increasing minority newborns.

The numbers highlight the nation's growing racial and age divide, seen in pockets of communities across the U.S., which could heighten tensions in current policy debates from immigration reform and education to health care and Social Security.

There are also strong implications for the 2010 population count, which begins in earnest next week, when more than 120 million U.S. households receive their census forms in the mail. The Census Bureau is running public service announcements this week to improve its tally of young children, particularly minorities, who are most often missed in the once-a-decade head count. The campaign features Nickelodeon's Dora the Explorer, the English- and Spanish-speaking Nickelodeon cartoon character who helps "mommy fill out our census form."

The population figures are used to distribute federal aid and redraw legislative boundaries with racial and ethnic balance, as required by federal law.

"The adults among themselves sometimes forget the census is about everyone, and kids should be counted," said Census Bureau director Robert Groves. "If we fail to count a newborn that is born this month, that newborn misses all the benefits of the census for 10 years."

Whites currently make up two-thirds of the total U.S. population, and recent census estimates suggest the number of minorities may not overtake the number of whites until 2050.

Right now, roughly 1 in 10 of the nation's 3,142 counties already have minority populations greater than 50 percent. But 1 in 4 communities have more minority children than white children or are nearing that point, according to the study, which Johnson co-published.

That is because Hispanic women on average have three children, while other women on average have two. The numbers are 2.99 children for Hispanics, 1.87 for whites, 2.13 for blacks and 2.04 for Asians in the U.S. And the number of white women of prime childbearing age is on the decline, dropping 19 percent from 1990.

• The population of Dakota County, Neb., increased from 15 percent minority in 1990 to 54 percent in 2008, due largely to an influx of Hispanics who came looking for work in meatpacking and other labor.

The 2008 census estimates used local records of births and deaths, tax records of people moving within the U.S., and census statistics on immigrants. The figures for "white" refer to those whites who are not of Hispanic ethnicity.