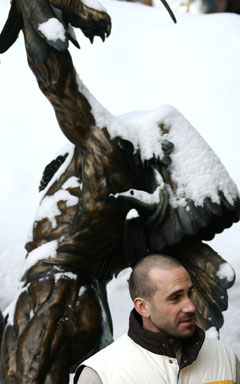 Dome stadiums and the Tampa Bay Devil Rays have been very good to James Baldwin.

Baldwin became the first three-time winner over the expansion team and improved his career dome record to 8-0 in the Chicago White Sox's 6-1 victory Monday night.

"It doesn't matter to me whether it's grass, artificial turf, hot, cold," said Baldwin, who has 30 career wins. "It's a win no matter where it is. Like pitchers, teams have their hot and cold spells. I've just been lucky against them."

Baldwin (7-4) outdueled rookie Rolando Arrojo (11-8) for the second time in a week. The Chicago starter had a shutout until Fred McGriff hit his 350th career homer with one out in the ninth. He was removed after getting one more out and Keith Foulke finished.

"You always want that complete game," said Baldwin who has two career complete games and no shutouts. "Even more, I wanted that shutout bad. But you got to think what's best for your team and not yourself."

The 27-year-old right-hander allowed eight hits, struck out seven and walked one in 8 2-3 innings. In Baldwin's three victories over Tampa Bay, the Devil Rays have scored only three runs in 21 1-3 innings and struck out 18 times.

"We've had some poor at-bats against him. It's that simple," Devil Rays manager Larry Rothschild said. "I can't explain it. There's no reason to get only one run tonight."

The White Sox chased Arrojo during a four-run, fourth inning that made it 6-0.

Magglio Ordonez, who got his sixth straight hit over the past two games, and Chad Kreuter had run-scoring singles. Mike Caruso got an RBI on reliever Rick White's error and Jeff Abbott drove in a run with a fielder's choice.

Ordonez saw the hit streak end when he flew out in the fifth.

Arrojo lasted three-plus innings, allowing six runs and 10 hits. Over his past three outings, the Cuban defector has given up 15 runs over 16 innings.

"It might be slight fatigue. I don't know," Arrojo said through an interpreter. "It's difficult to maintain a steady rise. There's always going to be declines. You'd have to be Superman."

Baldwin beat Arrojo last Tuesday in Chicago's 4-1 win at Comiskey Park. Baldwin also got the victory when the White Sox won at Tampa Bay 10-4 on April 3.

"James just seems to bring his A game every time he pitches against us," Tampa Bay's Quinton McCracken said. "He kept the ball down in the zone. He has very good stuff and he just puts it all together against us. You've just got to tip your hat to him."

Ray Durham had three hits, including a solo homer off Arrojo in the third inning. He has a hit in 13 of his past 14 games.