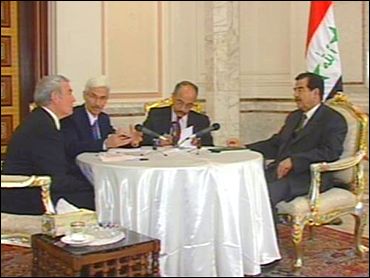 The White House sought to have an administration official counter Saddam Hussein's claims in an interview with CBS News Anchor Dan Rather, but could not reach agreement with the network on the right person to do it.

Much of the interview aired Wednesday night on CBS News' 60 Minutes II.

Presidential spokesman Ari Fleischer said the White House contacted the show early in the week to ask if an administration official could give a response. The show responded that "unless it was the president of the United States, the answer was no," Fleischer said.

Sandy Genelius, a CBS spokeswoman, said the show's executive producer did not tell the White House initially that "it was President Bush or nothing," only that the president would be an acceptable alternative to the White House's offer for Fleischer to appear at the end of every Saddam segment.

After Fleischer's briefing, CBS News said it would include either Mr. Bush, Vice President Dick Cheney or Secretary of State Colin Powell in its broadcast. Fleischer declined to say whether the White House would take the network up on that offer.

Genelius said the administration countered by offering either Fleischer or White House communications director Dan Bartlett, which the network deemed inappropriate for the show. At that point, the discussion seemed to end, she said.

"We're going to give the interview itself ample context," Genelius said.

Fleischer complimented Rather's questioning of Saddam as a "serious journalistic interview." At the same time, he said, "I think the American media generally are going to be facing some interesting and difficult decisions as Iraq puts people out to engage in propaganda."

"We view what Saddam Hussein has said as propaganda and lies," he said.

The White House did succeed in getting several broadcast networks to televise live an address by the president in which he reiterated the administration's case for war. The speech preceded the airing of the Rather-Saddam interview by roughly two hours.

It was a rare case of networks breaking into early prime-time programming to deliver an address by the president that was not delivered from the White House or to Congress, but instead to a conservative business organization, the American Enterprise Institute.

The flap over the 60 Minutes II interview was not the first media warning from the White House.

Fleischer raised hackles when, a few weeks after the Sept. 11 terror attacks, he criticized remarks by comedian Bill Maher that faulted the U.S. military for, in Maher's view, waging war in a cowardly fashion.

Shortly thereafter, in October 2001, the White House cautioned television networks to be careful about showing videotaped messages from al Qaeda leader Osama bin Laden and his organization, which some law enforcement officials have alleged could contain coded messages from terror cells.

The media's treatment of enemies is a long-standing subject of debate between governments and the press.

During the first gulf war, then Sen. Alan Simpson of Wyoming criticized CNN correspondent Peter Arnett — who stayed in Baghdad even after fighting began — for being an Iraqi sympathizer.

When NATO launched air strikes on Serbia to drive its troops out of the breakaway province of Kosovo, BBC correspondent John Simpson's decision to remain in Belgrade was faulted on similar grounds.