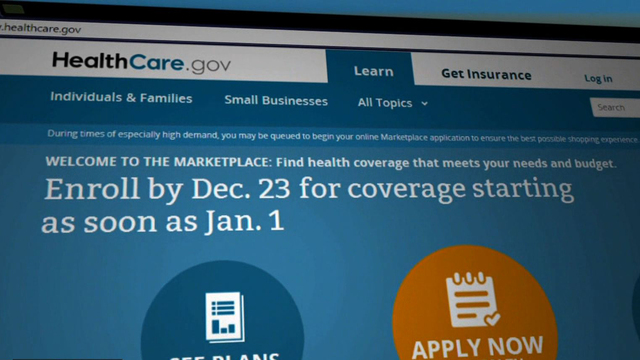 Over the weekend, the Obama administration reported more than one million people have now signed up for health insurance under HealthCare.gov.

They heralded the rush of sign-ups with an announcement on the internet calling it "a welcome surge in enrollment" caused in part "because we met our marks on improving HealthCare.gov."

However, it is only one-third of the administration’s original projections of 3.3 million enrolled by the end of the year. Officials seemed confident about that number three months ago, but instead, there was gridlock on the website.

On day one, six enrollments nationwide, by the end of October, 27,000 people managed to sign up and there were 137,000 by the end of November.

The White House says things are getting on track and of the 1.1 million people the administration says are enrolled through HealthCare.gov, the overwhelming majority, 975,000, registered in December.

“I think the first year is going to be more successful than most people think,” said former Vermont Gov. Howard Dean on "Fox News Sunday." “I think people will have insurance that didn't have it before.”

It's still unclear who exactly is signing up, and the administration needs the young and healthy to enroll in large numbers in order to support the system. Also, there are concerns that Americans could experience complications trying to use their new insurance when it kicks in, a point Republicans are eager to make

“Obamacare is a reality,” said House Oversight Committee Chairman Darrell Issa, R-Calif. Sunday on NBC’s “Meet the Press. “Unfortunately, it's a failed program that is taking a less than perfect health care system from the standpoint of cost and making it worse.”

CBS News’ Jan Crawford said the 1.1 million is the count from 36 states, who are using HealthCare.gov and therefore is not a complete picture of enrollment. She said there should have a better assessment in January, when the government is expected to release a full 50 state report.

The administration set a goal of 7 million sign-ups by the time open enrollment ends in March.