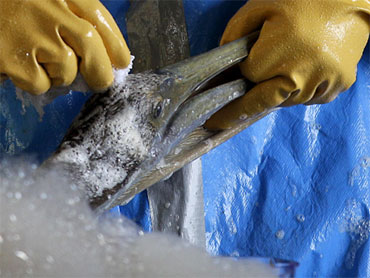 The federal official overseeing offshore drilling announced his departure Monday in a fallout from the Gulf oil spill and criticism that federal regulators have been too cozy with industry.

President Barack Obama, meanwhile, has decided to have a presidential commission investigate the cause of the rig explosion that unleashed millions of gallons of oil into the Gulf of Mexico, where engineers are struggling after three weeks to stop the flow.

The presidential panel will be similar to ones that examined the Challenger space shuttle disaster and Three Mile Island nuclear power plant accident, said a White House official, speaking on condition of anonymity because the decision had not been formally announced. The commission also will examine the safety of offshore oil drilling and the effectiveness of its regulations.

In Congress, more attention was focused on the Gulf spill.

Sen. Barbara Boxer, D-Calif., and seven other senators asked the Justice Department to determine whether BP PLC made false and misleading claims to the government about its ability to prevent a serious oil spill when it applied for permission last year to drill the Deepwater Horizon well that has unleashed environmental havoc along the Gulf coast.

But lawmakers are taking aim not only at BP at hearings this week, but also the Interior Department's regulation of offshore drilling that allowed BP to operate without assurance a massive spill could be prevented.

On Monday, the fallout from the Gulf spill began having its impact on the agency charged with regulating offshore drilling.

Chris Oynes, the associate Minerals Management Service administrator for offshore drilling programs, informed colleagues he will retire at the end of the month, according to an e-mail sent to agency officials and obtained by The Associated Press.

Oynes, who was regional director in charge of Gulf offshore oil programs for 13 years before he was promoted in 2007 to head all offshore drilling programs, has come under criticism for being too close to the industry.

He told colleagues unexpectedly that he will retire on May 31. A person in Oynes' office said he was in meetings and unavailable for comment. Oynes had earlier indicated his plans to retire, but decided to accelerate his departure, said an administration official, who spoke on condition of anonymity because the issue involved a personnel matter. It was unclear what pressure, if any, was made.

The departure was welcomed on Capitol Hill.

"It represents an opportunity to begin anew with a clean slate," said Rahall, whose committee is investigating MMS' regulation of offshore drilling activities.

Rep. Darrell Issa, R-Calif., a longtime MMS critic, said the agency has been corrupt for more than a decade, a period spanning three administrations, and that its shortcomings were not the fault of one person. The agency "is in need of an exhaustive overhaul and comprehensive reform," he said.

At a Senate hearing Monday, Coast Guard Rear Adm. Peter Neffenger says the Gulf oil spill is beyond what anyone anticipated and demonstrates that response plans for future spills will have to be changed. Neffenger, the deputy national incident commander at the Coast Guard, testified before the Committee on Homeland Security and Government Affairs.

Nearly a month into the crisis, BP America's President Lamar McKay admitted Monday it may be nowhere near the end, reports CBS News correspondent Sharyl Attkisson. If all else fails, hopes are pinned on so-called "relief wells."

"We do have a high level of confidence that the relief wells will permanently seal the well," McKay said.

Boxer, whose Environment Committee will hold hearings Tuesday, said BP claimed to have the capability to prevent a serious oil spill in case of a well blowout.

"In the wake of the Deepwater Horizon oil spill ... it does not in any way appear there was 'proven equipment and technology' to respond to the spill" as BP claimed, she and the other senators wrote Attorney General Eric Holder. They asked the Justice Department to determine whether any criminal or civil laws may have been violated as to misleading the government.

Anticipating tough questioning on Capitol Hill at hearings this week, Interior Secretary Ken Salazar on Monday announced a tightening of requirements for onshore oil and gas drilling. The new measures would not apply to oil rigs at sea.

"The BP oil spill is a stark reminder of how we must continue to push ahead with the reforms we have been working on and which we know are needed," Salazar said.