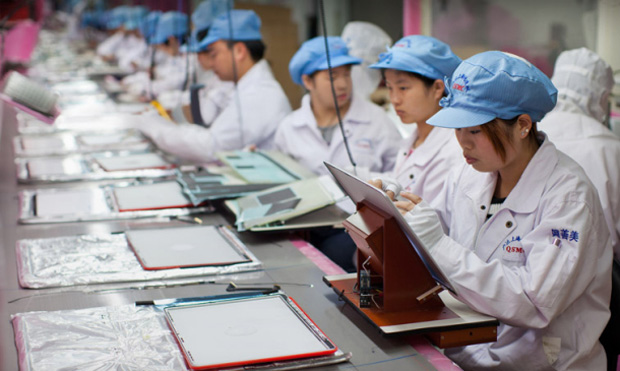 The White House announced Wednesday that the Taiwanese electronics manufacturer Foxconn will build a plant in Wisconsin.

Foxconn is perhaps best known in the U.S. as the manufacturer of Apple's iPhone and iPod, and also controversies surrounding its treatment of its workers in mainland China.

The company, which is the largest manufacturer of electronic products in the world, has been faulted for shoddy work conditions, and has made headlines for the numerous suicides that have taken place at its factories. It eventually installed suicide-prevention nets at some of its factories.

An invitation to the announcement describes the plant as a "state-of-the-art Gen 10.5 manufacturing facility for the production of LCD panel products." Speaker Paul Ryan, R-Wisconsin, and other Congressional leaders attended the announcement, along with Republican Wisconsin Gov. Scott Walker and President Trump.

"This has the opportunity to be one of the largest job creators in US manufacturing," a senior administration official told CBS News. "These are excellent wage jobs."

President Trump had hinted at a June rally in Wisconsin that a new factory could soon open its doors in the state, saying he was "negotiating with a major, major incredible manufacturer of phones and computers and televisions." He also said Walker, who is running for reelection to a third term in 2018, might get "a very happy surprise very soon."

In a Tuesday interview with The Wall Street Journal, Mr. Trump said that Apple CEO Tim Cook has promised to build several factories in the U.S.

"I spoke to [Mr. Cook], he's promised me three big plants—big, big, big," Mr. Trump said as part of a discussion about business-tax reform and business investment. "I said you know, Tim, unless you start building your plants in this country, I won't consider my administration an economic success. He called me, and he said they are going forward."