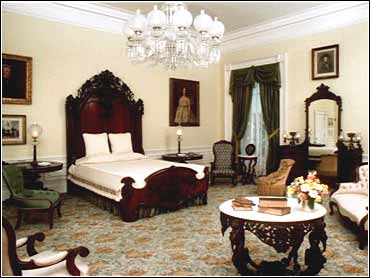 In an effort to defuse a political issue for the first lady, the White House Friday released a list of 361 people who have spent the night at the White House or Camp David as guests of the president and Mrs. Clinton over the past 15 months.

Hillary Clinton has been accused by Republicans of using such invitations as a fund-raising device for her U.S. Senate campaign. Roughly one out of four overnight guests contributed to the first lady's Senate race, her campaign said.

The list also includes a string of celebrities whose names do not appear on campaign contribution lists for the first lady: Meg Ryan and her husband, Dennis Quaid; Danny Devito and his wife, Rhea Pearlman and Will Smith and his wife, Jada.

The non-partisan Center for Responsive Politics said a preliminary analysis of the list indicated that 98 of the guests contributed to Clinton's Senate campaign. Those guests gave a combined $108,000 directly to the Hillary Clinton Senate Committee, and an additional $516,000 to one of the several affiliated committees operating on her behalf, the center said.

Unapologetic for the sleepovers, press spokesman Joe Lockhart said, "The Clintons will continue to invite guests to visit with them at the White House and at Camp David during the president's remaining months in office."

Mrs. Clinton, campaigning in New York, said the list would not hurt her candidacy. "I don't think so, because the vast majority of the people on the list have not contributed to my campaign," she said. "There's certainly no basis for believing that they are anything other than what they are, which is friends and supporters."

Guests included dozens of political figures, such as former President Jimmy Carter and his wife, Rosalyn; former Sen. John Glenn, 13 governors and others.

The list covered guests who stayed overnight from July 1, 1999, when Mrs. Clinton began her "listening tour" in New York as a prelude to hecampaign for the Senate, through Aug. 31, 2000.

The list was broken down into six categories: Arkansas friends, 51 people, longtime friends, 102, friends and supporters, 86, officials and dignitaries, 77, arts and letters and sports, 45, and family and friends of Chelsea Clinton, 43. The White House omitted the names of Chelsea's pals.

Mrs. Clinton has acknowledged that some contributors have been invited to sleepovers, but denied that the invitations were made in return for money.

"We have friends and supporters come and spend time with us and spend the night with us that we are getting to know and who like spending time with us," she said last week. "I don't see what's news about that."

Republican Rep. Rick Lazio's campaign has accused Mrs. Clinton of a "blatant abuse of power" by having donors spend the night.

"History is again repeating itself and has reached a new low," Lazio campaign manager Bill Dal Col said last week. "The use of the Lincoln Bedroom and Camp David as accommodations for campaign 'supporters' is nothing less than a taxpayer funded abuse of power, and is yet another example of why New Yorkers can't trust Hillary Clinton."

The Clinton administration was criticized after the 1996 campaign for inviting big donors to spend the night. Republicans in Congress, along with some less partisan critics, complained that the practice dulled the majesty of the White House.

"The Lincoln Bedroom was never sold," President Clinton said in 1997, when the White House released a list of 938 guests who had spent the night at the White House to that point in the Clinton presidency. That list included political supporters, as well as entertainment luminaries and old Clinton friends.

Republican presidential nominee George W. Bush came under fire earlier this year after The Associated Press reported in March that he had housed campaign supporters in the Texas governor's mansion. Bush said they were all friends or relatives, but Sen. John McCain, R-Ariz., compared the practice to Clinton's use of the White House.