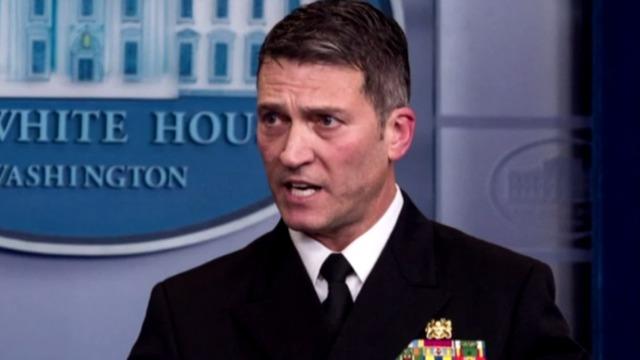 The White House is disputing reports that the administration is worried about Rear Adm. Ronny Jackson's chances for being confirmed as the next Veterans Affairs Secretary, blaming members of Congress for attacking Jackson's character.

Speaking to reporters outside the White House on Monday, White House Press Secretary Sarah Huckabee Sanders said that the administration has "a lot of confidence in him and his ability."

"Dr. Jackson is an incredibly highly qualified individual. He's served our country on the battlefield as well as under three presidents. I think it's sad that you've got a few members of Congress who have never managed anything more than a congressional office attacking someone who has served our country, served it admirably, and we have a lot of confidence," Sanders said.

Jackson was tapped to become the next VA secretary after President Trump fired former secretary David Shulkin. The Iraq War veteran is best known for his January press conference in which he gave Mr. Trump a clean bill of health.

Sanders' comments come as Axios reports, citing sources with direct knowledge of deliberations on the Hill and in the White House, that senior administration officials and senators across the aisle are growing concerned over Jackson's prospects as he heads into his confirmation hearing later this week. When he was named, CBS News chief White House correspondent Major Garrett noted that Republicans were cautious and unsure of what they'd see from him in during his confirmation hearing, while "Democrats have been more skeptical, saying he really has no  management experience sufficient to the task of running the Veterans Affairs Administration, the second largest agency in the federal government."

As for concerns into his lack of support on the Hill, Sanders said the process was just getting started. "We're still hopeful that as people get to know him, get to know who he is and how qualified he is that they'll come on board."

"Ronny Jackson is a great American story of a small Texas town kid who grows up, goes to medical school, decides to serve our country, rises all the way up to be admiral, serves and treats our troops in combat who are wounded in combat. Has a father as a veteran, a son who's in training to be a Navy Seal. I think that Ronnie Jackson is a great story. We look forward to him getting his hearing," added short.

Sanders told reporters that the White House will "keep pushing forward" and is hopeful that Congress will "make the right decision" in confirming Jackson. She said Jackson is somebody that "really cares about veterans, really focused on helping the VA, and not making it a political game and actually just going in there to get something done."

Jackson will face the lawmakers' questions during his confirmation hearing on Wednesday.