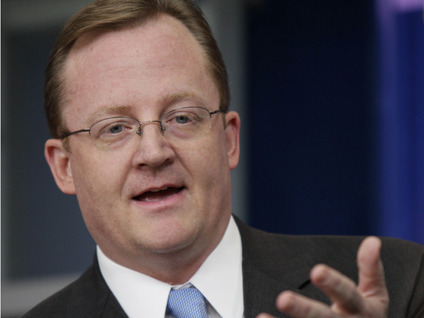 Robert Gibbs may have overplayed his hand a bit in today's White House briefing.

He was rolling along pretty well, defending the president's economic policies by citing a recent study that found that TARP (the bank bailout) and the stimulus were so crucial to the economic recovery that without them (1) GDP in 2010 would be about 6½ percent lower and (2) employment would be lower by 8½ million jobs.

But he took his argument a little too far when he claimed that one of the study's authors, Mark Zandi, had been the McCain campaign's chief economic adviser.

The problem is, that's not true.

It's all a bit down in the weeds, but I've heard the White House use this inaccurate argument so many times, I finally decided to call them on it.

Zandi is Moody's chief economist, and one of the smartest and most respected minds in the business. Better yet, he speaks in simple English, so even TV reporters can understand his explanations of how the economy works.

Whenever Zandi says something nice about the President's economic policies, the White House seizes on it: "See?! Even John McCain's chief economic adviser agrees with us!" They act as if that settles the matter. If even our chief critic agrees with us, we must be right.

But Zandi is not even close to their chief critic. If you look at his positions, he's far from an ideologue. He leans a little left in some places (stimulus) and a little right in others (tax cuts).

I covered the McCain campaign and was briefed by McCain's economic team many times. Zandi was never involved.

When I called Gibbs on it today, he initially pushed back, insisting Zandi was an adviser to McCain. But he then admitted that Zandi has been an adviser to the Obama White House. The truth is, he's an all-purpose smart guy who has advised politicians in both parties.

I talked to Zandi after today's briefing and he said he too was tired of having his role with McCain mischaracterized, and appreciated that it had been clarified. He repeated what's he's told me before -- that his role in advising McCain was "very modest" and that he was far from being McCain's chief economic adviser.

For the White House to portray him as such, and to try to use that for political purposes, seems a bit disingenuous, not to mention unfair to Mark Zandi.