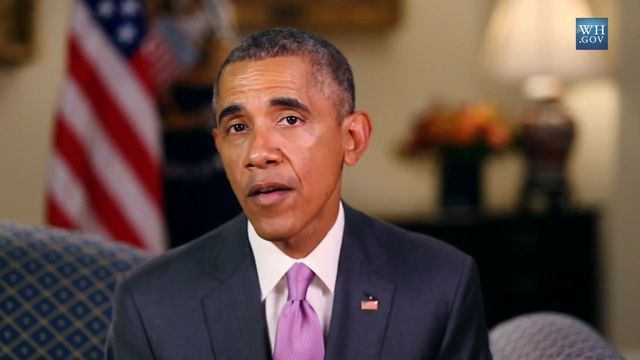 As open enrollment season on HealthCare.gov begins, President Obama is introducing a contest meant to motivate Americans to sign up for health insurance coverage through federal and state exchanges.

"I want to see how many of your neighbors you can get signed up," the president said in a video released Saturday. "I'll come visit the city that enrolls the highest percentage of folks who aren't covered right now. That's a promise."

Twenty major cities will participate in the Healthy Communities Challenge, competing to see the largest decrease for those without health insurance. A high percentage of the population in these cities, with Democratic mayors, remain uninsured.

The president touted the ease of signing up through the Health Insurance Marketplace, saying with just "a few clicks on HealthCare.gov, you'll find private insurance companies competing for your business."

"Under the Affordable Care Act, if you want to change jobs, go back to school or chase that new idea, you can do it without worrying about going broke if you get sick," Mr. Obama said.

The president also obliquely slammed critics of the Affordable Care Act who, like the current crop of Republican presidential hopefuls, continue efforts to repeal and replace Obamacare.

"What we're talking about is no longer just a law, and it's certainly not the myths and scare tactics that the cynics have peddled our way for years," the president said. "This is reality."

Mr. Obama's announcement of the sign-up challenge comes just as the Supreme Court agreed to hear yet another challenge to the 2010 law. The latest suit against the health care overhaul involves objections over the law's contraceptive coverage requirement for faith-based hospitals, colleges and other organizations.

Johnson, an Air Force veteran who served in Korea and Vietnam, recounted his experiences as a prisoner of war. He spent over three years in solitary confinement during the Vietnam War.

"I got through those years by the grace and mercy of God, and he gave me all the support I needed in my fellow POWs," Johnson said in a video released Saturday. "We banded together, encouraged one another and kept each other's spirits up."

The congressman recounted one night when a typhoon struck the city of Hanoi and flooded the POW camp.

"The floor of my cell filled with water, and I huddled against the wall as far away from the rain as I could," Johnson said. "I began to pray as I had never prayed before. And I felt a strange sense of peace in the darkness."

That night, the Texas Republican said, reminded him of the price of liberty.

"Freedom isn't free," he said. "It has a cost. And that cost is paid first by our veterans and their families because when one member joins, it is the whole family that serves."

"When our veterans come home, we should do all we can to make sure they get the care they need when they need it," Johnson said. "That is the least we can do."