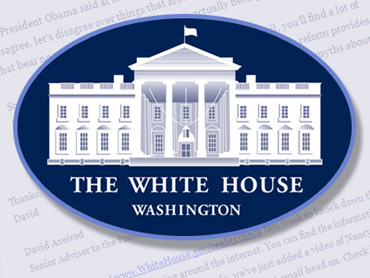 (CBS/White House)
Up against increasingly vociferous criticism of and opposition to the health care plan President Obama wants, White House Senior Adviser David Axelrod has launched an e-mail campaign to fire back.

Axelrod wants to refute what he calls "the viral emails that fly unchecked and under the radar, spreading all sorts of lies and distortions."

His Internet outreach reflects growing concern at the White House that the president's efforts to enact an overhaul of the health insurance system in America are encountering unexpectedly tough resistance and are in trouble.

Mr. Obama is doing three town hall meetings this week to make his case on health care. He did one Tuesday in Portsmouth, NH. He has another tomorrow in Bozeman, MT and a third on Saturday in Grand Junction, CO.

At the start of Axelrod's e-mail, which he addresses to "Dear Friend," he quotes the president from Tuesday's event, speaking out against "wild misrepresentations" of the health care plan he wants. He said opponents were citing provisions "that bear no resemblance to anything that's been proposed."

Since it doesn't cost more to e-mail five pages than five words, Axelrod's chosen the former to make his case. His missive includes what he describes as:

The arguments he makes for the president's health care plan are familiar and start with an end to denial of coverage for pre-existing conditions.

Among the "myths" he cites are opposition claims that the administration plan amounts to "a government takeover" of health care that will lead to "rationing." "To the contrary," writes Axelrod, "reform will forbid many forms of rationing that are currently being used by insurance companies."

He also seeks to reassure senior citizens, insisting "it's myth that health insurance reform would be financed by cutting Medicare benefits."

Axelrod urges his e-mail recipients spread his message and "start a chain email of our own."

He clearly doesn't mind if his e-mail goes viral.