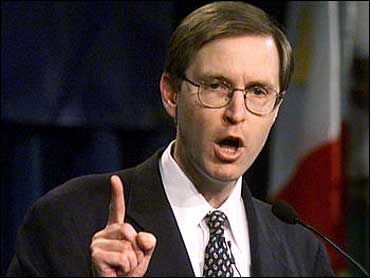 While Hubbard's resignation had been expected, it comes at a sensitive time for the White House. The administration is trying to persuade Congress to pass a $674 billion economic stimulus plan that Hubbard had a major hand in developing.

An expert on the economic effects of taxes, Hubbard was a strong advocate for the proposal's centerpiece — elimination of the double taxation of stock dividends.

This idea, however, is the most contentious part of an overall plan that Democrats contend offers little immediate help for the economy. They also charge that most of the $360 billion in tax breaks over 10 years would flow to the wealthiest investors.

Mankiw, 44, is an expert in monetary and fiscal policy and the author of two college textbooks: "Macroeconomics" and "Principles of Economics," the latter an introductory textbook for which Mankiw received a $1.4 million advance in 1997.

Mankiw had interviewed for the White House job back in January.

In his resignation letter, Hubbard made only a passing reference to the stimulus plan Bush released in early January.

"While more remains to be done — particularly the significant jobs and growth initiative you have proposed, your administration has made excellent progress," Hubbard wrote.

He offered his continued services to the administration when he returns to his previous career as a university professor. Hubbard had been on leave from Columbia University in New York.

Bush in early December shook up his economic team by demanding the resignations of Treasury Secretary Paul O'Neill and Lawrence Lindsey, director of the president's National Economic Council.

That council coordinates economic policy in the executive branch. Hubbard's team, usually made up of experts with doctorates in economics, provides analysis of administration proposals.

Hubbard referred in his letter to a conversation he had with Bush in the fall in which the aide discussed the possibility of leaving.

Officials said Hubbard, whose wife and two young children had remained in New York, had wanted to leave for some time so he could spend more time with his family.

"As I discussed last fall, this decision is a difficult one, as serving you in the campaign and in this post has been the greatest honor and privilege of my professional life, but family needs are my most significant concern," Hubbard wrote.