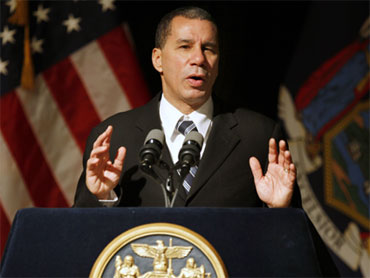 The president and the governor have a history of strained political relations but the White House is trying to downplay any notion of a snub.

Deputy Press Secretary Bill Burton says Paterson was invited to the president's Buffalo appearance but "couldn't make it due to important work with the New York legislature today." Paterson has been at odds with lawmakers of New York's budget crisis.

But earlier this week, Paterson almost sounded indifferent about the Obama visit to his state. Appearing on CBS Radio Buffalo affiliate WBEN, Paterson was asked if he had been invited.

The governor said, "I don't know that. I know he's coming. I'd have to get back to you on that." He went on to say, "we're just happy he's coming to the state of New York." Paterson quickly changed the subject to "the dire financial situation in New York."

The Obama-Paterson political chill went public last year when word leaked that the White House was pressuring the embattled governor not to seek re-election. Paterson eventually made that decision. In the WBEN interview he described himself as "not a lame duck...but a free duck."

President Obama is making a brief visit to Buffalo to defend his economic agenda. He will also attend a Democratic party fundraiser in New York City before returning to Washington tonight.

Diner to Obama: "You're a Hottie with a Smokin' Little Body" Peter Maer is a CBS News White House correspondent. You can read more of his posts in Hotsheet here. You can also follow him on Twitter.