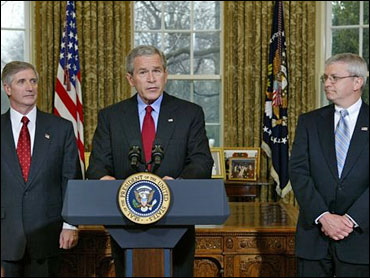 Appearing with Bush in the Oval Office, Bolten gave no hint about what, if any, shake-up he might order. But White House officials said no one should doubt his ability to replace Bush aides. "He'll have all the authority he needs ... to make the decisions that he feels best, working with the president," White House spokesman Scott McClellan said.

But sources have told CBS News that the president told Bolten he wants a complete review of the White House staff — he wants to find out what works and what does not, and make some changes. CBS News correspondent Gloria Borger reports one source said "he's given Josh a free hand."

Like Card, Bolten, 51, is a Washington insider whose ties reach back to Bush's 2000 campaign for the White House, and CBS News chief White House correspondent Jim Axelrod reports Bolton's appointment will not silence Republicans who have been calling out for a change. Democrats — as well as some Republicans — grumbled that the new White House boss looked a lot like the old one.

Mr. Bush said of Bolten, "He's a man of candor and humor and directness, who's comfortable with responsibility and knows how to lead. No person is better prepared for this important position."

Before being named budget director in 2003, Bolten was Card's deputy chief of staff for policy, a colleague of such senior aides as Karl Rove and Dan Bartlett.

Alarmed by Mr. Bush's falling approval ratings and White House mistakes — from the bungled Hurricane Katrina reaction to the ill-fated deal to allow an Arab company to manage U.S. ports — Republicans have been urging the president to bring in new advisers with fresh energy. The GOP's concerns have been heightened by anxiety over midterm congressional elections in November. Card, as chief of staff, became a target for blame.

Mr. Bush's approval rating remains at an all-time low of 34 percent, according to the latest CBS News poll. Just 28 percent of Americans think the country is headed in the right direction, while 66 percent say it's on the wrong track.

Said Democratic National Committee communications director Karen Finney: "As the saying goes, you can put lipstick on a pig, but it's still a pig. Unfortunately for the American people, all President Bush did today was make it clear that they should expect nothing more than the same failed policies they have come to know all too well."

Once believed to harbor ambitions of surpassing Sherman Adams' nearly six-year record as the longest serving chief of staff — under Dwight Eisenhower — Card told Bush on March 8 he thought he should leave, McClellan said. Bush decided over the weekend at Camp David to accept the resignation and replace Card with Bolten, the spokesman said.

"Ecclesiastes reminds us that there are different seasons, and there is a new season," said Card, whose wife is a Methodist minister.

To the public, Card may be best known as the aide who calmly walked into a Florida classroom and whispered to Mr. Bush that America was under attack on Sept. 11, 2001. A veteran of every Republican administration back to Ronald Reagan's, Card is respected in Washington as fair, smart and hardworking — the first to arrive at the White House around 5:30 a.m. and often the last to leave at night.

Card, 58, stood stoically with his hands by his sides as Mr. Bush lauded his years of service. Then, gripping the podium, Card said in his farewell: "You're a good man, Mr. President."

Card's eyes were watery. He said he looked forward to just being Bush's friend. Bush then gave him five quick slaps on the back, and the two walked out of the Oval Office together.

"Andy Card, a longtime friend of mine, is tired. That he stayed in this job this long shows how much he cares about this country," Sen. George Voinovich, R-Ohio, told reporters later.

As chief of staff, Bolten will regulate the paper flow to Mr. Bush's desk, oversee his schedule and determine who gets in to see the president — although some longtime aides have unquestioned access.

Bolten was budget chief when the government ran its three largest deficits ever, including the record $413 billion shortfall in 2004 — though most of that was because of the economy and years of decision-making by presidents and lawmakers.

"Josh Bolten has a record of failure," said Senate Minority Leader Harry Reid, D-Nev. "Look at what he's done with our national debt."

But Sen. Edward M. Kennedy, D-Mass., said Bush had made a wise decision in picking Bolten. "His reputation among Democrats and Republicans alike is being a tough-minded, skilled conservative but also has an ability to work with Congress, work with Democrats as well as Republicans."

Rejecting charges of staff inertia, McClellan said half of Bush's senior aides have been replaced since the president's re-election in 2004. But some in Mr. Bush's inner circle — such as Texans Rove, Bartlett, Harriet Miers and McClellan himself — remain at the White House after 5½ years.