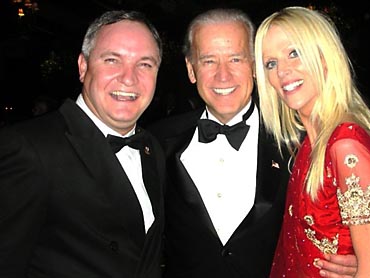 (Facebook)
WASHINGTON (CBS/AP) America's most successful party crashers, Michaele and Tareq Salahi, who stormed the gates of a White House state dinner and somehow managed to get in, may soon be facing criminal charges, according to the Secret Service.

Secret Service spokesman Jim Mackin says the agency is moving closer to beginning a criminal investigation. He says that's one reason the Secret Service hasn't yet explained what happened when Michaele and Tareq Salahi arrived at the security checkpoint Tuesday for the dinner honoring Indian Prime Minister Manmohan Singh.

The Salahi's came to national attention when they posted photos of themselves attending the White House event on their public Facebook account. In the images, Michaele Salahi, 44, a former Washington Redskins cheerleader, and her 41-year-old husband, Tareq Salahi, who is co-founder of the Land Rover America's Polo Cup and heir to a Virginia winery, can be seen glad-handing with politicians, journalists, and even a group of Marines.

In one picture, the happy couple appears with Vice President Joe Biden. The couple did not post any images of themselves with President Barack Obama or Michele Obama.

The couple is being considered for the upcoming reality show "The Real Housewives of D.C." on Bravo and on the day of the dinner, Michaele Salahi was being filmed around Washington, according to Bravo Media.

As for the criminal investigation into how the glamour happy couple wound their way into a high-security White House event, Mackin says there's less the Secret Service can say as the probe moves closer to a criminal investigation. He says the agency isn't leaving any options off the table at this point.