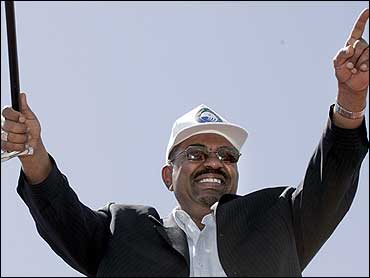 The ICC is charging al-Bashir with war crimes against humanity related to the violence in Darfur. As the Associated Press points out, the U.S. is not a member of the court, though the White House has pushed for accountability for those who have committed atrocities.

Gibbs did urge "restraint on the part of all parties, including the government of Sudan," as the "process moves forward." There is concern that there will be increased violence by the Sudanese government as a result of the warrant.

"Further violence against civilians, Sudanese or foreign interests is to be avoided and won't be tolerated," he said.

Secretary Of State Hillary Clinton, meanwhile, said that al-Bashir can "can certainly contest" the charges if he wants to.

"President Bashir would have a chance to have his day in court if he believes that the indictment is wrongly charged," she said.

State Department deputy spokesman Gordon Duguid, meanwhile, said all parties should cooperate with the court's decision, adding that "it is evident that the government of Sudan has the brunt of the responsibility for what has happened in Darfur."

And Reuters quotes State Department spokesman Robert Wood saying that the U.S. "believes those who have committed atrocities should be brought to justice."