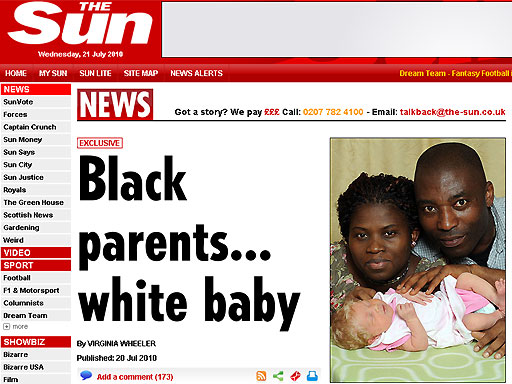 (CBS) How did Ben and Angela Ihegboro, a black Nigerian couple living in London, give birth to a white daughter?

The answer may not be so black and white, experts say.

According to the BBC, there are three potential reasons for the baby Nmachi's unexpected appearance: "dormant white genes which entered both of her parents' families long ago, a genetic mutation unique to her, or albinism."

The first reports on the family's strange case had ruled out albinism, but the BBC says Nmachi's doctors have not ruled it out.

Albinism, a condition whereby a person has little or no color in their skin, hair and eyes, can remain dormant in genes for many generations. Just because the couple's living relatives aren't afflicted by the disease, that doesn't mean they aren't carriers. It is not uncommon in Nigeria, according to the BBC.

But it's not the only possible explanation.

Doctors also say Nmachi's parents may harbor long dormant Caucasian DNA from a long forgotten interracial coupling, according to the BBC.  A third possibility is perhaps the most tantalizing but also the scariest. Nmachi may have a unique genetic mutation that doctors have not seen before.

More at the BBC and the Sun