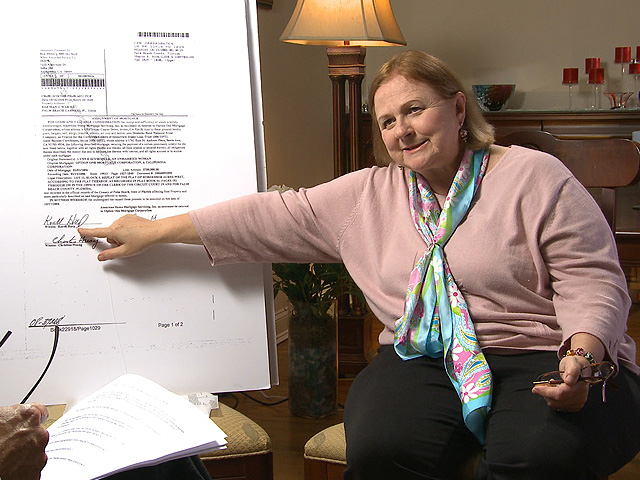 (CBS News) When we first met Lynn Szymoniak on 60 Minutes last year, she was an angry homeowner facing foreclosure. Now, Szymoniak is walking away with an $18 million settlement after blowing the whistle on a "robo-signing" fraud that she says was perpetrated by some of the nation's largest mortgage companies.

Szymoniak described her win as "a little surreal," speaking by phone to 60 Minutes yesterday.

"Robo-signing" is the illegal practice of forging mortgage documents. As 60 Minutes learned in its investigation last year (video below), the documents underpinning homeowners' mortgages are sometimes missing or nonexistent. Banks need such documents to foreclose on a homeowner, so some banks have resorted to fraud: creating phony or "robo-signed" paperwork to throw people out of their homes.

Szymoniak uncovered the "robo-signing" fraud while fighting to save her Florida home from foreclosure. After receiving what she considered to be fake paperwork from her bank, Szymoniak -- a lawyer and fraud investigator -- began investigating tens of thousands of documents in other foreclosure cases that appeared to be falsified.

She blew the whistle, claiming that the country's four largest mortgage services had defrauded the federal government by creating fake documents to replace lost or nonexistent ones in order to receive government-funded payments. The government joined Syzmoniak's complaint, and it was announced this week that those banks -- Bank of America, J.P. Morgan Chase & Co., Wells Fargo & Co, and Citigroup Inc. -- settled the case for $95 million. Under law, the whistleblower is entitled to a share of the money recovered by the U.S. government, in this case $18 million.

Mortgage mess: Who really owns your mortgage?
Scott Pelley explains a bizarre aftershock of the U.S. financial collapse: An epidemic of forged and missing mortgage documents

Although the $95 million settlement seems like a major win against the nation's banks, Neil Barofsky, law professor at NYU and former special inspector general for TARP, calls it a "drop in the bucket."

While some of those recovered funds will be dispersed to a group of homeowners, Barofsky estimates that those checks will be relatively small, around $2,000 per homeowner.

"It's not big enough to deal with the overarching problem of underwater mortgages that plague this country," Barofsky says. "But to see Lynn, someone who has been such a strong and vocal advocate against these practices, get this settlement is the lone bright spot."

Meanwhile, Szymoniak's own case against the bank that holds her mortgage continues. And, oddly enough, she still faces foreclosure.