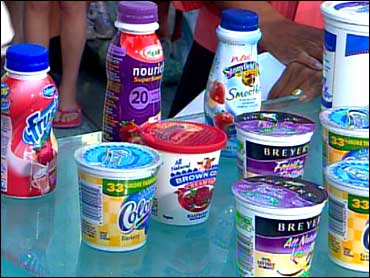 If you're looking for a healthy snack, you may turn to yogurt.

But which yogurts are the healthiest? There are so many on supermarket shelves, it's hard to know which is best for you.

But, on "The Early Show", Erin Hobday, senior diet and nutrition editor of Self magazine, had the scoop on the top seven brands.

She warns that yogurt can easily go from being a super snack to a "sugar bomb." On its own, it has about 12 grams per serving of natural milk sugar, which isn't too sweet. But many brands add sugar to make it sweeter.

Hobday says Self "absolutely" considers yogurt a super-food for weight loss, noting that people on a low-cal diet that included fat-free yogurt lost 81 percent more fat than people on a similar plan that didn't include yogurt. The balance of carbs and protein in yogurt can keep blood sugar levels steady and stave off hunger, while the calcium it contains may help your body store less fat.

Greek yogurt is increasingly popular because its really creamy and high in protein-it has nearly twice as much protein as other plain yogurts. But there's a catch: it has less calcium than other cups. It's processed in a different way so it loses calcium. Alternate between Greek-style and conventional yogurt (like the Dannon, below) to get all of the benefits that yogurt has to offer.

Six ounces of unflavored yogurt (like this one) should have 30 percent of your daily calcium needs-look for that on the label. And remember to stir it up! The watery layer that sometimes settles on top of your carton of plain yogurt is good for you. It's whey protein, which contains muscle-building amino acids. Mix it in; don't skim it off.

Fruity yogurts, like this one, tend to contain less calcium than plain (some of the calcium-rich yogurt is replaced by fruit). Check the label and look for those that have 19 percent of your daily calcium needs per cup. It does have added sugar, but it's on the low end of sugar content. This is good if you don't like plain yogurt but want a little sugar.

If you're looking to lose weight, look for flavored yogurts, like this one (and Ronnybrook above) that have 130 calories or less. And avoid low-fat types with more than 1 gram of saturated fat.

It's kind of cool for two reasons. It has probiotics, the healthy bacteria in yogurt, have been linked to strong immune systems and a lower risk for gum disease and even some cancers. Yoplait's yogurts are also fortified with vitamin D, which helps your body absorb more calcium. But not all yogurts have enough of the good stuff. The National Yogurt Associations Live & Active Cultures seal appears on some cartons that do (such as this one). It does have more sugar than we'd like.

This is like a dessert with some nutritional benefits. Six ounces of most plain yogurts have about 12 g of natural milk sugar (or lactose). That's okay, even if you're dieting. But every 4 g on top of that is a teaspoon of added sugar yours has 25 grams or more (like these two sweet treats) consider it dessert!

FOR TIPS FROM SELF MAGAZINE ON PICKING THE BEST YOGURTS, click here.