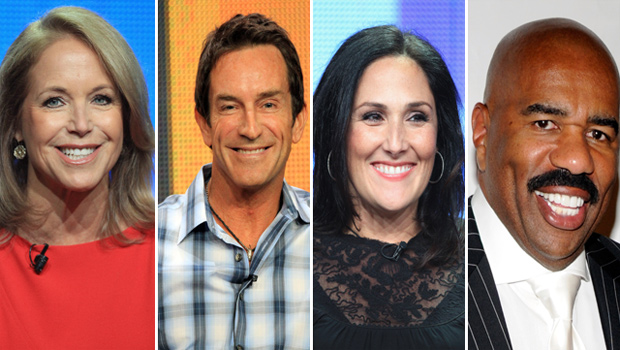 (CBS News) Ever since the departure of former daytime queen Oprah Winfrey, the field has been left open for a new reign over daytime television, and this season several new shows are vying for the spot.

Jeff Probst, Ricki Lake, Katie Couric and Steve Harvey will all debut new talk shows this fall, and each one is looking to come out on top.

Katie Couric's "Katie" premieres Sept. 10 on MSN TV. The show plans to cover serious events such as the recent Aurora shooting to lighter issues like dating in your 40s and 50s.

Her show kicks off with guests Jessica Simpson and Sheryl Crow.

Lake is returning to daytime after her successful '90s talk show, "The Ricki Lake Show," which launched when she was 24. Now, the 43-year-old Lake says her new show will feature "more substance than fluff," she told Time.

Lake told the magazine she wants to focus her show on talking with real people instead of celebrities, discussing topics from aging to dating.

The new "Ricki Lake Show" will launch on Sept. 10 on FOX.

"Survivor" host Probst is hoping to tackle the daytime TV jungle, too. Much like rivals Lake and Couric, his show will not be celebrity-driven. Instead Probst told reporters at the Television Critics Association that he looks to center the show around real people.

When asked about his competition, the Los Angeles Times reports Probst responded saying, "We haven't spent any time focusing on those shows. It's so much work just to get your own going."

Probst's show, which will premiere Sept. 10 on NBC, will share more of his personal life and will include appearances from his wife, Lisa Ann Russell, who is involved with the series as well.

Harvey, whose roots are based in comedy, will host his program in Atlanta. His show will focus on relationships, a topic the comedian knows well. Harvey has written two books on the subject matter and his book "Act Like a Lady, Think Like a Man" was made into a movie.

Harvey is also focusing on bringing non-celebrities to his show.

"I find regular people to be more interesting," he told the New York Post. "They're not on TV selling anything, they don't want you to buy their book or watch their movie... They have real stories, and other people can relate to that, like when it comes to how to be a better parent, how to make it, why can't I get along with my mom."

He also told the paper that he will bring his sense of humor to the show: "I'll bet you that other than Ellen [DeGeneres], no one comes close. Funny is my business. I'm a comedian."

"Steve Harvey" will debut on NBC on Sept. 4