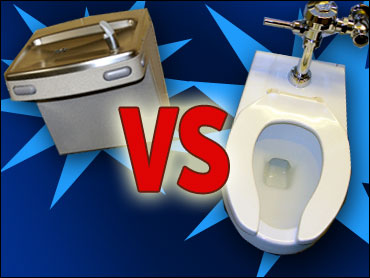 Middle School student Kyleray Katherman had a hunch something was amiss with the school's drinking fountain water. And right he was.

For an English assignment, he tested the bacteria content at four water fountains and one toilet to challenge a ban on students from bringing bottled water to class. It seems some were using it to sneak in alcohol.

Guess which was cleaner? It wasn't the water fountains.

He then asked students where they would prefer to get their water. That wasn't the fountains, either.

Classmates, teachers, administrators and board members said they had no idea.

Katherman attends the Oregon Coast Technology School that operates at North Bend Middle School with a focus on infusing technology into all areas of study, including English.

Katherman, 13, used Q-tips and petri dishes, swabbing the spigots of four fountains and sampling one toilet, dunking the cotton in the bowl's center and then dragging it around the rim for a complete sample.

He took the results to the school lab put them under a light to speed up the bacteria's growth.

The petri dishes with fountain water were swarming with bacteria. The sample from the toilet was clean, probably because the toilets are doused with cleansing chemicals daily.

Before telling his classmates which sample was which, he asked them which water they'd prefer to drink. Everyone chose the toilet water. Then he told them which came from where.

"I wanted to see the looks on their faces," Katherman said.

He took his results to the North Bend School Board with an eye-opening PowerPoint presentation.

Administrators quickly replaced the spigots and casing at three of the water fountains and custodians gave them all a thorough cleaning.

More teachers are providing water in classrooms now, but the ban on water bottles remains.

"It was a great lesson. We don't always see things in and about the school that are in need of repair," said Scott Edmondson, the school's principal, adding, "You'd be surprised how clean the water is in a toilet."

The projects by other students are also bringing about changes at the school, such as getting broken lockers fixed.

"The kids got to see that, yes, they can make a difference, if they do it right," Katherman's teacher, Barb Becker, told the Register-Guard of Eugene, Ore.