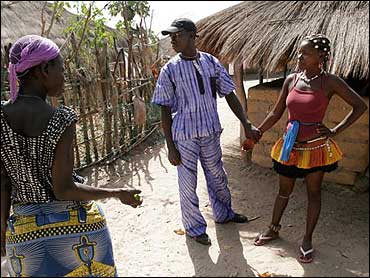 He was 14 when the girl entered his grass-covered hut and placed a plate in front of him containing an ancient recipe.

Like all men on this African isle, Carvadju Jose Nananghe knew exactly what it meant. Refusing was not an option. His heart pounding, he lifted the steaming fish to his lips, agreeing in one bite to marry the girl.

"I had no feelings for her," said Nananghe, now 65. "Then when I ate this meal, it was like lightning. I wanted only her."

In this archipelago of 50 islands of pale blue water off the western rim of Africa, it's women, not men, who choose. They make their proposals public by offering their grooms-to-be a dish of distinctively prepared fish, marinated in red palm oil. It's the equivalent of a man bending on one knee and offering a woman a diamond ring, except that in one of the world's matriarchal cultures, it's women that do the asking, and once they have, men are powerless to say no.

To have refused, explained the old man remembering the day half a century ago, would have dishonored his family — and in any case, why would he want to choose his own wife?

"Love comes first into the heart of the woman," explained Nananghe. "Once it's in the woman, only then can it jump into the man."

But the treacherous tides and narrow channels that have long kept outsiders out of these remote islands are no longer holding back the modern world. Young men are increasingly leaving Orango, located 38 miles off the coast of Guinea-Bissau, a country in West Africa. They find jobs carrying luggage for tourist hotels on the archipelago's more developed islands; others collect oil from the island's abundant palm trees and sell it on the African mainland.

They return bringing with them a new form of courtship, one which their elders find deeply unsettling.

"Now the world is upside down," complained 90-year-old Cesar Okrane, his eyes obscured by a cloud of cataracts. "Men are running after women, instead of waiting for them to come to them."

Standing in the shade of a grass roof, he holds himself upright with the help of a tall spear and explains that when he was young he took extra care to maintain his physique, learned to dance and practiced writing poetry — all ways in which men can try to attract women, without overtly making the first move.

"The choice of a woman is much more stable," explains Okrane. "Rarely were there divorces before. Now, with men choosing, divorce has become common."

With records not readily available, it's unclear how many divorces there were earlier, but islanders agree that there are significantly more now than in the years when men waited patiently for a proposal on a plate. They waited some more, as their brides-to-be then set out for the eggshell-white beaches encircling the island, looking for the raw materials with which to build their new house.

Women built all the grass-covered huts here, dragging driftwood back from the ocean to use as poles, cutting blankets of blond grass to weave into roofs and shaping the pink mud underfoot into bricks. Only once the house is built, a process that takes at least four months, can the couple move in and their marriage be considered official.

There are matrilineal cultures in numerous pockets of the world, including in other parts of Africa, as well as in China's Yunnan province and in northeastern Thailand, says anthropologist Christine Henry, a researcher at France's elite National Center for Scientific Research, or CNRS. But the unquestioned authority given to women in matters of the heart on this island is unique — "I don't know of it happening anywhere else," says Henry, who has written a book on the customs of the archipelago.

That things are changing is evident in the material chosen for the island's newest house: concrete. It was erected by paid laborers, not local women.

Although priestesses still control the island's relationship with the spirit world, their clout is waning, as churches sown by missionaries have taken root.

"When I get married it will be in a church, wearing a white dress and a veil," says 19-year-old Marisa de Pina, who strikes a modern pose under the blond grass of her family's hut, wearing tight Capri pants and sequined sandals.

She says the Protestant church she attends has taught her that it is men, not women, that should make the first move, and so she plans to wait for a man to approach her. To make her point, the teenager pops into her hut and returns holding a worn copy of the New Testament, its pages stuffed with post-it notes, letters and business cards.

It's a decision that has caused strife inside the mud walls of her family's house.

Like her niece, Edelia Noro wears store-bought clothes instead of the grass skirts still favored by some older women. She, too, attends church. But she says she doesn't see why these trappings of modern life should alter the system of courtship.

More than two decades ago, she set off for the closest beach looking for the ingredients with which to propose to the man she loved.

Noro waited for the tide to recede, then dug in the wet sand for clams, collecting them in a woven basket. She was embarrassed, she said, that she was too poor to afford a proper meal of fish and could only offer her groom-to-be what she could gather with her own hands. So after preparing the dish, she placed it in front of him, then ran and hid behind a tree, peeking out to see his reaction.

"He did not hesitate and ate right away. I could see the love shining in his eyes," she said, a glow spreading across her cheeks.

Although the island's unique customs may be fading, there are still pockets of resistance. Often, it's women that lure men back into the fold of ancient ways.

Now 23, Laurindo Carvalho first spotted the girl when he was 13. He worked in a tourist hotel, wore jeans, and owned a cell phone and thought of himself as modern and so he thought he could turn tradition on its head, asking the girl to marry him. With the wave of a hand, she rejected him.

Six years passed and one day, when both were 19, he heard a knock at his door. Outside, his love stood holding out a plate of freshly caught fish, a coy smile on her face.

Carvalho still wears sandblasted jeans and flip-flops bearing the Adidas logo, but he now sees himself as embedded in the village's matriarchal fiber.

"I learned the hard way that here, a man never approaches a woman," he says.