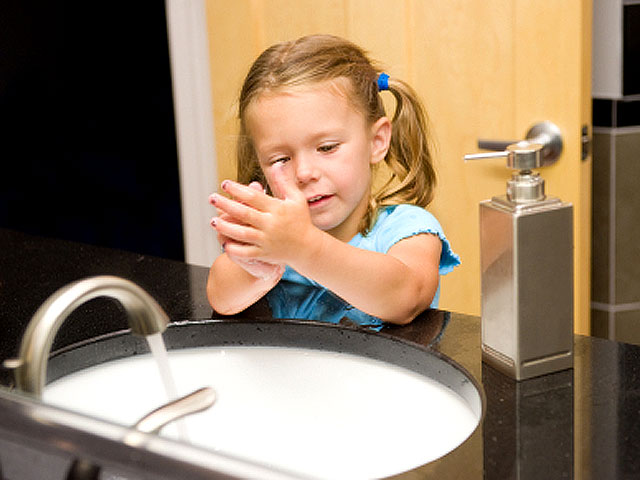 What do you think is the most germ-filled place in your house? After testing dozens of homes, a new study reveals the truth.

To find out, scientists from public health and safety organization, NSF International, swabbed 30 surfaces in 22 homes - that's 660 tests in all - to check for germs in the bathroom, the kitchen, and on everyday household objects. And, says "Early Show" Consumer Correspondent Susan Koeppen, the results may surprise you.

One homeowner said, "I'd like to think that the bathroom has the most germs. But part of me really believes it's the kitchen."

Koeppen said she's right. While most people think their bathrooms are dirtiest. It's actually the kitchen.

According to the NSF study, 32 percent of all counter-tops, 45 percent of sinks, and 77 percent of sponges tested positive for coliform bacteria, which can cause food poisoning. Testing also found staph germs, an indicator for the so-called super-bug known as MRSA, on 14 percent of refrigerator handles and 18 percent of sponges.

Lisa Yakas, senior microbiologist of the Food Division at NSF, said the No. 1 germiest item that researchers found was a dish sponge belonging to Dawn Simpson's family. The sponge had a stomach-churning coliform count of 1.8 billion - 180 million times the amount of germs on a new clean sponge.

Other hotspots in Simpson's kitchen were her counter top and coffee maker.

NSF representative Yakas said, ""People think they're already cleaning the kitchen and they neglect some of the areas they really need to focus on."

And in Simpson's bathroom Koeppen revealed this shocker: the germiest spot was her toothbrush holder It had over a thousand times more coliform bacteria than her toilet seat.

Yakas said, "If the bristles become contaminated and you're putting that into your mouth, that's direct cross contamination right there."

So what are the germiest spots in your home? According to NSF:

Simpson told Koeppen she plans to stop using a sponge in her kitchen.

Instead of using a sponge, Koeppen suggested using a dishrag that you can throw in the washing machine. However, if you can't part with your sponge, she said popping it in the microwave for two minutes to kill germs. She said you should also replace sponges every two weeks.

Co-anchor Chris Wragge observed, "It's disgusting to think that you'd be safer to basically brush your teeth in the toilet bowl."

Koeppen said, "All the people watching this story right now brushing their teeth are like, 'Great. Thanks, Susan."

Why are sponges so germy?

Koeppen said, "They have so many nooks and crannies and think about where people keep it. It's next to the sink. It's in the sink. It's all wet and mushy and gross. If you can get rid of the sponges, don't use them. But if you're addicted to using a sponge to clean your dishes replace it quite often."

She added, "Everybody thinks the toilet is going to be disgusting, so let me clean that. But you really have to think about the things that you're not cleaning on a regular basis and maybe you should. Stuff like the tooth brush holder. And really scrubbing the kitchen sink."

Has this affected Koeppen's cleaning regimen for her home?

Koeppen said, "I will admit that the first thing I did when I went home is I put the toothbrush holder in the dishwasher. I cleaned that. I bought a huge package of sponges, because I use a sponge in my kitchen. But I started to get rid of them every couple of days. And use a new one."