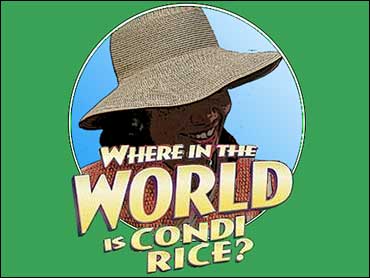 Friday morning she was in Brazil. After that it was off to Chile. Secretary Rice returns to Washington on Saturday, and leaves Sunday for Russia.

Rice is traveling so much these days one really needs a world map and a GPS device to keep up. Including her upcoming trip to Moscow for talks with President Putin and his newly-elected successor, Dmitry Medvedev, Rice will have made nine trips abroad compared to five during the same time frame last year.

The State Department Web site is pretty good helping to keep track of Rice's travels. Log on to www.state.gov and you can find such headings as "Where in the World is the Secretary Today?" and "Where Has the Secretary Been?"

Oh yes, there are people who keep track of all this. For instance, through the end of 2007 we are informed that Rice has traveled 698,591 miles since becoming America's top diplomat in 2005. In case you are curious about how many countries Rice has visited up to the end of last year, the number was 66.

Already this year Rice has been to South America and the Middle East twice, to Europe three times, and to Africa (with the President), Asia and South Asia once each.

Last week Rice was in Cairo, Jerusalem, Ramallah and Brussels. After her trip to Russia State Department officials have already announced Rice will accompany President Bush to the NATO summit in Bucharest, Romania, in April and to Jerusalem in May to celebrate the 60th anniversary of Israel's statehood.

In between there is every likelihood she'll spend plenty of time in Jerusalem and Ramallah, cajoling Israelis and Palestinians to make more progress following up on the administration's Annapolis peace conference last November. Not much progress has been made, and for every little bit forward momentum there is almost always a slide in reverse on one front or another - either in Gaza or on settlement expansion or in one of the many other areas where the two sides have substantial disagreements. President Bush even made reference to the push-and-pull of progress toward a Palestinian state when he said, "This is a process that, you know, always has two steps forward and one step back. We just got to make sure that it's only one step back."

For Rice another issue with ongoing negotiations which dominates the administration's foreign policy legacy is the ongoing 6 party talks over North Korea's nuclear program.

At some point this year there might be a foreign minister's level meeting on the talks but that likely won't take place unless Ambassador Christopher Hill, the administration's chief negotiator, can get the North Koreans to provide a full and complete listing of their nuclear activities, something they have pledged to do but have not yet done to Washington's satisfaction. Look for more travel to Asia to push this along.

Rice was in Baghdad in December of last year and now we seem to be in a cycle where the senior military commander and the ambassador to Iraq, Ryan Crocker, make semi-annual trips to Washington to report on progress there. Nevertheless, there is an upcoming meeting of the Iraq Neighbors Group in Kuwait (although it has not been announced if Rice will attend). Last month she made a one-day trip to Afghanistan, going to Kabul and Kandahar.

There seems to be almost no end to Rice's travels and the places she'll go. In fact, it's a safe bet there are only three places where she will not be turning up before her term ends next January: Pyongyang, Tehran and Havana. A real gambler who's also an optimist might want to place a few dollars, euros or yen on Pyongyang as a long shot, but the odds would have to be pretty good.