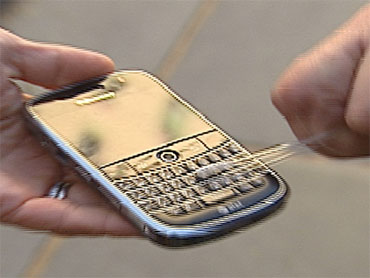 In our ongoing series "Germ Warfare," "The Early Show" goes into the home and office and onto the streets looking for the places where bacteria hide.

And we've found plenty of them:

Germs Lurking in Your Laundry?
Your Kitchen: A Breeding Ground for Germs?
Are You Working with Dangerous Germs?

Which items have the most germs?

CBS News correspondent Kelly Wallace reported that scientists now say it's the things we use most that harbor the most germs, and the more germs, the more likely viruses are present.

Just where are these germ factories?

Dr. Charles Gerba -- also known as "Dr. Germ" -- has been tracking the levels of disease-causing bacteria for 10 years. He uses a germ-meter, which gives a relative idea of how many bacteria are living on a surface.

Gerba, of the University of Arizona, found after conducting more than 7,000 studies that the most germs per square inch are on the things we touch the most, such as cell phones. In fact, says Gerba, they're No. 1 on his list.

Wallace says more than 203 million Americans currently own a cell phone. She cited a recent study, published a study in the Annals of Clinical Microbiology and Antimicrobials, that showed 94.5 percent of cell phones used by health care workers had evidence of bacterial contamination.

Gerba, armed with his germ-meter, which measures the level of surface bacteria, joined Wallace on the streets of New York to see if she could test their cell phones.

The target number for cleanliness was a number less than 100, Gerba said.

The first phone was practically germ free, a BlackBerry. Then Gerba put Wallace's flip phone to the test. According to Gerba, flip phones have more germs because they don't dry out as well as other phones, leading to moisture, which tends to hold more germs.

Wallace had the dirtiest phone, with a count of 261 bacteria on her phone's surface.

"It's a title I'm not really excited to have," Wallace said.

Another area where germs may hide is at the ATM. Gerba found millions of bacteria on a New York City ATM machine outside of a building. He said ATMs can be some of the biggest germ offenders.

And where do women put their money after pushing those buttons?

Gerba says your handbag may actually be a Petri bag of germs.

Wallace said women plop them down on the bathroom floor, the pigeon-covered sidewalk and then at home.

Gerba said,"(Women will) come home from shopping, and then stick it right on the countertop and make lunch."

But what about Wallace's bag?

It was the most germ-ridden of all the ones Gerba tested.

"Time for a new bag," Wallace said. "My husband's been urging me to get a new one. I think it's time."