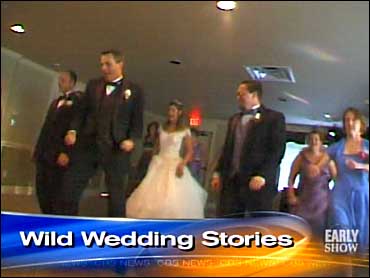 Many brides dream of a traditional wedding with a white gown in a big church. But some couples are spicing up their big day with some of their own personal flair.

People magazine features memorable marriage moments in a special issue called Real Life Weddings, which is now on the stands. The issue features more than 40 original wedding stories such as the London couple who decided to make their first wedding dance extra-special with moves straight from the film "Dirty Dancing."

"They're actually in show business," said Jess Cagle, "The Early Show" contributor and People assistant managing editor. "This thing has been viewed on YouTube about 1 million times. It's been a boost to their careers. He has a movie coming out he directed. They're doing well. This is a good idea for them."

Ruth Ann Smith and James Horner met while working at Wal-Mart and got married there earlier this year. She walked down from the electronics section and he walked in from the tire section. They met somewhere in the middle.

"They said they wanted to do it there because all their friends worked at Wal-Mart," Cagle said. "Everybody decorated the aisles and Wal-Mart provided the cake."

Another couple got married on a ski slope in Montana. The bride is a snowboard instructor and the groom is a ski instructor. They exchanged vows while going down the mountain.

An Oklahoma groom decided that the entire wedding party should do the dance from Michael Jackson's "Thriller" video.

"He got a video of 'Thriller,' made copies for everybody, slowed it down so the entire wedding party could memorize the dance moves," Cagle said. "This was a lot f work. They rehearsed for a month."

Meghan McCoy and her husband Lauren Cody had a near catastrophe at their wedding. Meghan twisted her ankle badly just before the ceremony getting out of the mini bus which took her to the church.

Thanks to adrenaline, McCoy kept smiling and laughing and stayed focused on getting it over with.

"It's going to hurt more later on," she said she told herself. "Just go on with the wedding and we can deal with it later."

"I didn't know what was happening," Cody said. "I mean, her mom came up to me right before the ceremony and said she fell but I had no idea how bad it was until after and we saw exactly how swollen it was. It was the size of a softball."

Somehow, the couple made it through the reception, even though McCoy had to dance on crutches.