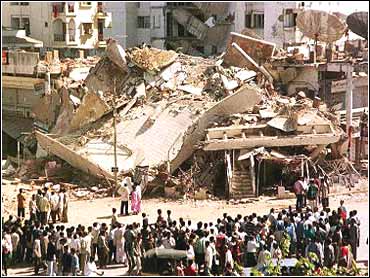 Amit Chitre is an anchor/reporter for WROC-TV, the CBS affiliate in Rochester, New York. This is his view of the devastating earthquake in India.

Through my relatively young five-year career as a television news reporter, I've seen thousands of "Urgent" news bulletins from the Associated Press flash across the bottom of my computer screen.

Tens of thousands more news flashes surely came while I was away from my desk. A daily scan of the wires would reveal dozens of such messages, many of which go unnoticed in a busy newsroom scrambling to cover urgent stories in its own community.

In the race to beat the deadline, I seldom slow down to read the national or international wires. Let the producers worry about it. I’ll wait until my story is in. Wait until after the live-shot. Wait until after the newscast. There’s always time to catch up on news of the outside world you might have missed.

But in the middle of an always-frenzied weekday afternoon, my eyes were drawn to the bottom of the computer screen once again.

This time I opened the story. My eyes raced through the text, again searching only for key words.

I glanced around the newsroom to gauge reaction. No one else seemed to share my urgency. Why would they? They’ve never walked through the city streets that are now buried under tons of rubble. Their parents don’t fondly remember Gujarat as home. Their relatives don’t still live there.

In the minutes that followed, AP sent more updates across its wire. Hospitals, schools and entire villages were leveled. 400 schoolboys marching in a Republic Day parade were crushed under falling buildings. Those blessed by some miraculous survival were equally cursed with the loss of everything and everyone they knew.

I stared at the phone on my desk, thinking of the calls I'd have to make. My brother, my parents, all caught up in the hectic pace of their daily jobs had almost certainly not yet heard the news. I would have to tell them our country is in rubble.

I reached for the phone, and the conversations unfolded in my mind. They would not be easy. My father would want more answers than I could provide. Answers about his home state. About his brother and cousins who live there. About friends he hasn’t seen in years.

The deadline clock kept ticking. News of the day doesn’t wait for personal crisis. Part of me regretted opening up that first AP story. Perhaps I should have followed my own rule. Wait until after the newscast. Now, as the deadline approached I realized the phone calls would have to come later.

I reluctantly returned to my story of the day. On the six-month anniversary of a bizarre murder, the elderly victim’s daughter starts her own investigation. She interviews neighbors, talk to police investigators, sets u a hotline for potential tips. I stopped to wonder if this woman knew of the urgent news from India. If she cared. I couldn’t help but think, perhaps she may want to send out her own urgent bulletin, but will never get the chance.

The buzz of the newsroom continued behind me. Our producers debated how to cover the earthquake in our newscasts. The network hadn’t sent us any video yet. The best we could do was have an anchor tell what little information we knew, covered by a map of the area hit by the quake.

Another producer suggested skipping the story altogether. His argument was well-supported. We had a lot to cover in local news, and the national newscasts would surely report on the disaster. No need in duplicating our coverage.

I turned to blast the suggestion. Thousands feared dead, and they’re ready to move on like it never happened. How dare they ignore the story? Where is their news judgement? People need to know what happened. They need to know how they can help. It’s our job to tell them. Then I stopped to think about how many times I’ve made the same argument against a story someone else may have found equally significant. Suddenly my hypocrisy stared me in the face.

News happens. We find out what has happened before others. But if we don’t tell others what happened, is it still news? I stopped to consider the hundreds of “Urgent” stories I skipped over and the people they affected. I wondered if those people got all the information they needed. Or did some producer or some reporter in a far away station decide the story was not newsworthy enough?

Our station ultimately had information on the India earthquake that night, as did the CBS Evening News. The days after saw a flood of follow-up stories. Heartbreaking tales of families trapped beneath their homes. Inspirational stories of children surviving under rubble after days without food or water. Communities across America, including here in Rochester, rallying to raise money and supplies for disaster victims.

While saddened by the daily reports of a rising death toll, and images of destruction, I was grateful for the amount of coverage the earthquake received. Perhaps American media has recognized the valuable role more than one million Indians play here in the U.S. Perhaps the coverage is recognition of the developing relationship between the world’s two largest democracies. Or perhaps my own personal feelings, and those of other Indians in the business persuaded the media to provide this tragedy with the coverage it deserves. So much for unbiased news.

Weeks later, I sat at my desk and saw the India earthquake pushed out of the newscasts by other local, national and world vents. Be it a charity event in town or a bomb blast in Israel, I wondered how many followed those stories with the same compassion that I held for the quake victims. I wondered who would lobby for them to make sure their stories are told. Their stories now seem just as important, and deserve just as much attention.

My thought was broken when my eyes once again glanced down as a bulletin flashed across the bottom of my computer screen: "Urgent..."