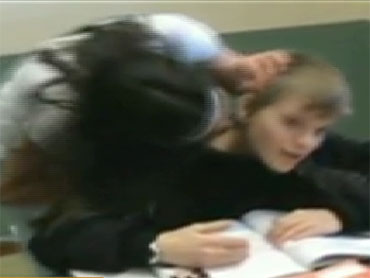 With the latest movie in the "Twilight" series, "Eclipse" earning more than $175 million in its first week, and HBO's "True Blood" garnering a huge following, fans are sinking their teeth into all things vampire.

But the popularity of this fantasy world has spawned a troubling new trend among teens: biting.

CBS News Correspondent Michelle Miller interviewed some teens who are familiar with the trend at school to see what they had to say about this new behavior.

High school sophomore, Pao Hernandez, said she refused to give up her blood for a boy when he asked in middle school.

"It's a way to belong to somebody, and mark their territory," explained Hernandez.

She says couples at her school are drawing blood to show their love and devotion to each other.

But according to parenting blogger Vanessa Van Petten, friends are leaving their marks on each other to show their closeness.

"This really concerns me because it has to do with possession," explained Petten. "We're talking about something that's about ownership, possessing your friends."

While this trend may seem strange, it is also dangerous and can spread disease. CBS Medical Correspondent, Dr. Jennifer Ashton joined Chris Wragge to discuss the potential health risks that may come from a bite that breaks skin.

"This is kind of the modern day version of the hickey, but we have to remember, any time there's a break in the skin, especially when you're talking about the human mouth, it's loaded with bacteria," said Ashton. "That can be an entry for bacteria to get into the skin. You can set up for potentially some serious skin infections."

Human bites are no joking matter, while toddlers and babies all go through a biting phase; Ashton reminds teens that it can be physically painful and can cause serious damage.

"This is now creating a soft tissue injury with blood, teeth marks or just a significant bruise in the area. And it can be potentially serious," said Ashton.

Ashton gives some signs to distinguish whether it is a serious bite. She says teens should be on the lookout for swelling, redness or pus. Also, where the injury occurs can often effect how damaging a bite can be. Anything on or near the face, the eyes, hands, and feet, which means a joint is involved, is a serious location.

"And then in whom did the bite occur? Anyone who has a potentially weakened immune system can be much more susceptible to a significant infection," warned Ashton.

In case you have to treat a bite mark, Ashton suggest using warm soap and
water and to stay away from betadine or peroxide. In severe cases, Ashton suggests oral antibiotics or, in the worst cases, hospitalization.

"Not only obviously are there physical consequences but psychosocial," said Ashton. "This is a way of marking a person, and it is a form of emotional and physical abuse."