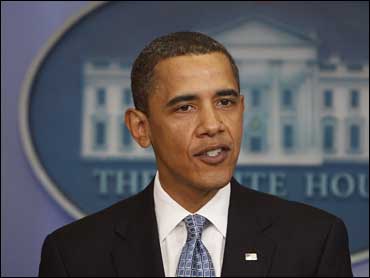 (AP Photo/Ron Edmonds)
Some people noticed that many reporters rose from their seats last Friday when President Obama unexpectedly entered the White House briefing room, but the same courtesy was not always extended in the past when President Bush would make an appearance.

It's a long-standing practice for reporters to rise when the president enters the East Room for a news conference, but that hasn't been the case in the briefing room.

I checked with two colleagues who served as senior wire service reporters during the Bush Presidency and who, in matters of press protocol, the rest of us followed.

But the principal reason reporters remained in their seats, he said, was not to block the shot of TV cameramen and still photographers in the back of the room who were trying to make a picture of the president's walk-in.

No disrespect was intended for President Bush and to the best of my knowledge none was taken.

In addition, it only takes about three steps for the president to reach the lectern from the press room door. He'd be ready to begin and many reporters would barely be out of their seats, which used to be further complicated by swivel desks that had to be shifted out of the way.

When some reporters stood up for President Obama last Friday, they forgot about the needs of their colleagues in the back of the room as well as the less formal atmosphere of the briefing room. Certainly it was a sign of respect for the president, but not one of disrespect for his predecessor.

It was President Obama's first time at the briefing room lectern since taking office and for some new members of the White House Press, it was their first time seeing a president enter the room as well.