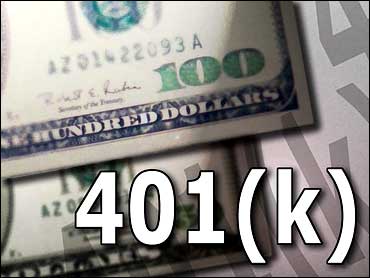 IBM is the latest in a list of companies (also including Verizon and Sears) that are freezing their pension plans.

Eliminating defined benefits can help boost a company's bottom line, but what does it mean for employees? Personal finance adviser Ray Martin visits The Saturday Early Show to explain.

Workers who move into a 401(k) plan will still receive a pension when they retire, but only the benefits they accrued up to the date of the pension freeze. Since the most significant accruals of pension benefits typically occur when workers hit their late 40s and 50s after a long tenure at a company, a freeze can mean a significant reduction in expected retirement income for someone at the peak of their career.

The bottom line is that workers in pension plans that are frozen or terminated will need to boost their savings now to make up for any shortfall in expected pension income.

In a "hard freeze" like those at IBM and Verizon, all participants stop earning benefits. The assets remain in the pension and will be paid out when the workers retire or leave the company, but the workers' benefits don't grow with additional years on the job. It's as if the affected employees had changed jobs and stopped building a pension at their former employer. So far, relatively few large companies have done this, including Circuit City Stores Inc., Sears and hospital-products firm Hospira Inc.

More common are "partial freezes," such as closing the pension to new workers, which is something Motorola Inc., Lockheed Martin Corp. and Aon Corp. have done, or to workers under a certain age, as NCR Corp. has done.

Companies often freeze their pensions in stages. Sears froze its pension as of Jan. 1. But in 2004, before its merger with Kmart Corp., Sears stopped offering pensions to new workers and cut off existing employees below age 40 from building benefits.

Why are companies freezing pensions? Companies say they're trying to become more competitive and adapt to changing times. Some, including technology firms like Hewlett-Packard Co. and IBM, say they must compete with younger companies that never made pension promises, or foreign companies where the government provides significant retirement benefits.

Workers in many industries are concerned that their employers will put the brakes on their pensions. Here are some groups that are most at risk: