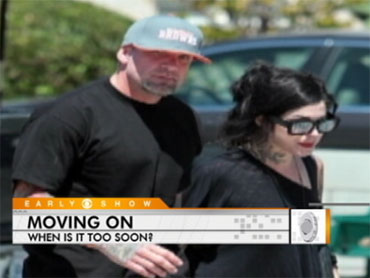 Whether by tragedy or choice, the end of relationships is always hard. But for celebrities whose every move is captured by cameras, deciding when it's OK to date again can be tricky.

It's been a year and a half since actor Liam Neeson's wife, Natasha Richardson died in a tragic skiing accident. Last weekend British newspapers photographed him with his rumored new girlfriend. It raises the question -- when is the right time to move on?

"The Early Show" took to the streets and asked the public what they think.

"A year and a half is plenty of grieving, I think," one woman said when asked about Liam Neeson.

"It's been and year and a half and he's making the decision to move on and show that he has the spirit of living, so I respect that and more power to him," another woman said.

But what about cases of infidelity? Less than six weeks after finalizing his divorce from Sandra Bullock, bad boy Jesse James flaunted his affection for new girlfrind Kat Von D.

"It's probably something like revenge or something, I don't know," a man told CBS News about the controversial pairing.

Earlier this summer, former "Frasier" star Kelsey Grammer's 13-year marriage to wife, Camille ended due to "irreconcilable differences." But Grammer was soon out and about with a new woman who also happens to be carrying the actor's fifth child.

If you've still got that guilt and shame or whatever on your heart from that last relationship and you go into a new one, it's not going to work out.

So, how long do you have to wait if you're the one who's been cheated on?

"About an hour and a half!" one woman laughed.

Relationship expert and Huffington Post blogger, Heide Banks, and Matt Titus, founder of the website, "The Love Consultants," sat down with "Early Show" co-anchor Erica Hill, to discuss how best to move on once your relationship has ended.

Listen to their advice: