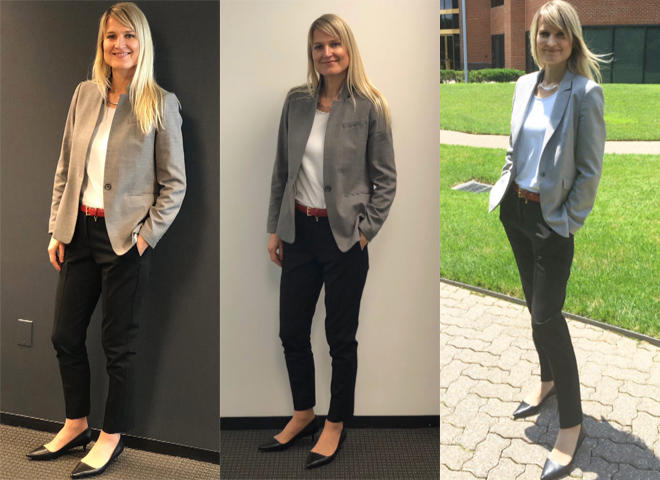 Mornings for Renata Briggman can be hectic. Getting two kids out of bed, fed and ready for the day leaves little time for the single mom to get herself together.

Two years ago the real estate broker decided to simplify her routine. Now, she says, "It's easy. I know exactly what I'm wearing."

Correspondent Vladimir Duthiers asked, "Why did you decide to start doing this?"

"I was just exhausted every morning trying to figure out how to look 'pulled together,'" she replied. "I started to try to find a solution."

A solution, Briggman says, that goes unnoticed. "A great colleague of mine said, 'You know, Renata, you are the only person who knows how to wear a red belt every day with a different outfit.' I was like, 'Yeah, but I wear the same thing every day!'"

She was inspired to give it a try after hearing about Facebook founder Mark Zuckerberg, whose familiar outfit – a gray T-shirt and jeans – was, he said, part of an effort "to clear my life to make it so that I have to make as few decisions as possible."

Other successful people also see the benefits of stepping into the same look every day: former President Barack Obama, "Dunkirk" director Christopher Nolan, "Bonfire of the Vanities" author Tom Wolfe, and designer Michael Kors have all stuck with signature outfits.

For some it's about fighting decision fatigue.

"When people make one decision after another after another, it saps their self-discipline and self-control," said psychologist Barry Schwartz, author of "The Paradox of Choice: Why More Is Less" (HarperCollins).

Steve Jobs famously wore a black mock turtleneck and jeans every day. In 2011 Jobs recommended the strategy to his friend, CBS News medical contributor Dr. David Agus, and even bought him his first outfit.

Agus has been wearing the same thing, a white shirt and black V-neck sweater, for the past seven years.

Duthiers asked, "Do you ever get bored?"

In fact, far from boredom, too many options can actually produce a negative effect.

As Schwartz describes it, "The paradox of choice is simply that although choice is good, you can have too much of a good thing. When people have too many options, they're paralyzed instead of liberated, and make worse decisions. And even when they make good decisions, they are less satisfied with them."

So, Duthiers decided to try it out himself.

First, pick out the perfect outfit. "If I had to wear something every single day, I'd probably go with something plain and simple. You don't want it to be so obtrusive that people are constantly remarking on your clothes."

Trying on his light blue shirt, tie, and dark jacket and pants, Duthiers said, "This is what a work uniform should be all about: Plain, simple, it doesn't draw your attention to the clothes, it draws your attention to me."

He wore the outfit (with the jacket on "CBS This Morning," without on CBSN) for an entire week.

Actually, Duthiers believes a few colleagues did notice but didn't say anything to him.

When it comes to the workplace, dressing the same can feel so different.

Renata Briggman said, "I always felt confident and pulled together and professional. It was kind of like a complete game-changer for me. Every single day it was like this amazing thing."

And she still has the weekends to wear whatever she wants.

She says she thinks her weekend wardrobe has improved, too, because she has more brain power now to think creatively about changing up what she's going to wear in her free time.