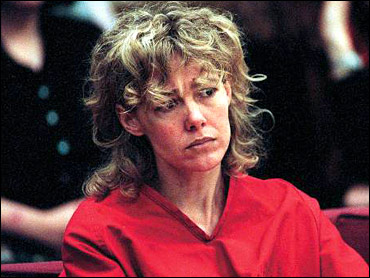 Mary Kay LeTourneau could walk out of a Washington State prison at any hour on Monday.

She's the former schoolteacher who had an affair with a student, Vili Fualaau, a relationship that began when the boy was just 12 years old.

It resulted in two pregnancies, and for LeTourneau, a seven-year jail sentence for child rape. The big question: what happens next?

Mary Kay LeTourneau sacrificed it all: husband, kids, her job and her freedom, all for the love of a schoolboy, Vili Fualaau.

Gregg Olsen, author of the book: "If Loving You Is Wrong", an insider look at the LeTourneau saga, says, "You know what? She really was a child molester. I mean, the law says she was."

What shocked America, he stresses, is that the boy was in elementary school.

Mary Kay LeTourneau was a sixth-grade teacher; Vili Fualaau, a 12-year-old in her class. Their relationship was hardly a secret. In fact, one of the places they were caught together was right on school grounds.

Olsen notes, "A janitor caught them in the stall, in a bathroom stall at one point. Other teachers saw them kiss."

In a 1995 home video from a school holiday party, Vili is shown in a black tank top. Within a year, he would get his teacher pregnant. And she would face prison time.

At the centencing, the court clerk announced, "The crime of rape of a child in the 2nd degree is classified as the most serious offense."

As she pleaded guilty to child rape, LeTourneau appeared remorseful.

At the 1997 sentencing hearing, she said, "It was wrong, and I am sorry. I give you my word that it will not happen again."

Though prosecutors wanted a seven-year sentence, the judge allowed LeTourneau to remain free as long as she stayed away from Vili.

The jugde said, "Whether you stay out of prison is completely within your hands!"

Olsen notes, "They released her, and of course the second she got out, she went back to him."

The Seattle Times reported it on Feb. 5, 1998, with the following headline: "Police Find LeTourneau with Youth... Caught in Car at 3 a.m."

The two were caught together, a scene re-enacted in a TV movie.

Once again, LeTourneau returned to court. Once again, she was pregnant.

This time, she was given the full seven-year sentence, while the alleged victim claimed there'd been no crime.

Their two children, both girls, are with Vili. His mother has custody of them. Vili and Mary Kay wrote a book together proclaiming their love.

Attorney Anne Bremner befriended LeTourneau and has maintained contact with her over the years. Bremner says she thinks LeTourneau, oncew released, will not shun the spotlight.

"I think that she'll run toward it," Bremmer says and notes LeTorneau is still in love with Vili."I don't think there's any doubt in her mind, my mind, or anyone else's mind."

So is this an incredible love story? Or is it a story of a child molester?

"Actually, it's both," Bremmer says.

When Mary Kay LeTourneau walks out of prison this week, she'll have to register as a sex offender, and stay away from Vili Fualaau. However, since he's now an adult, he can ask that the no-contact order be rescinded."

In a 1998 interview Vili said, "I still have feelings for her. Deep feelings."

But that was six years ago. Vili Fualaau has given no indication of what he'll do now. Olsen, who wrote a book on LeTourneau, has no doubt what she'll do.

Olsen says, "I really expect her to make a beeline for Vili Fualaau." And he expects she will try to get custody of the girls.

"There's no question," he says, "Because she wants to show the world that she was right and that these two beautiful children are the product of a normal healthy, happy relationship."

However, Vili is no longer a 12-year-old boy.

Olsen notes, "If he doesn't want her, this has all been for nothing, and I think that could kill her."

Bremmer points out, "She called herself the Joan of Arc of forbidden love. It was like Romeo and Juliet."

Only we know how Romeo and Juliet ended.

Bremmer says, "There's some forboding, I think, in everyone who's been involved in this case, that something's really going to go awry. It has to. It's a classic tragedy."

'CSI Miami': Behind The Scenes