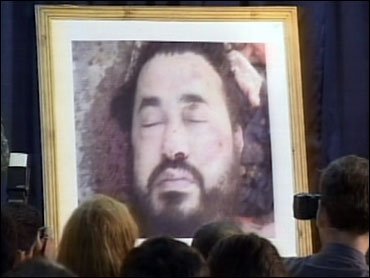 Officials were reluctant to speculate about the long-term impact of al-Zarqawi's death or the future of Iraq. The White House was careful not to predict that it will hasten the withdrawal of the more than 130,000 U.S. troops there.

"The death of Zarqawi does not change overnight the situation," White House spokesman Tony Snow said. "Nobody expects a snap change."

Al-Zarqawi, the most wanted terrorist in Iraq with a $25 million bounty on his head, was killed when U.S. warplanes dropped 500-pound bombs on his isolated safe house northeast of Baghdad, coalition officials said Thursday.

At the White House, President Bush hailed the killing as "a severe blow to al Qaeda and a significant victory in the war on terror." But, he cautioned, "We have tough days ahead of us in Iraq that will require the continuing patience of the American people."

Defense Secretary Donald H. Rumsfeld also said that while the death of al-Zarqawi is a significant victory in the war on terror, it won't end terrorism.

"Given the nature of the terrorist networks, really a network of networks, the death of Zarqawi, while enormously important, will not mean the end of all violence in that country," Rumsfeld told reporters.

(CBS)
Rumsfeld, who has been under consistent fire from critics for his handling of the war in Iraq, took his time Thursday taking the stage for one of his military's most significant intelligence victories of late. When asked how the other defense ministers reacted to the news of al-Zarqawi's death, he adroitly said, "positively."

"But," he added, "let there be no doubt, the fact that he is dead is a significant victory in the battle against terrorism in that country, and I would say worldwide, because he had interests outside of Iraq. He was an integral part of the war on terror."
In Baghdad, Iraqi prime minister Nouri al-Maliki, flanked by U.S. Ambassador Zalmay Khalilzad and Gen. George Casey, the top U.S. commander in Iraq, told a news conference that "al-Zarqawi was eliminated."

The announcement of al-Zarqawi's death came six days after he issued an audiotape on the Internet, railing against Shiites in Iraq and saying militias were raping women and killing Sunnis and the community must fight back.

Al-Maliki said the air strike was the result of intelligence reports provided to Iraqi security forces by residents in the area, and U.S. forces acted on the information. Casey said the hunt for al-Zarqawi began two weeks ago, and his body was identified by fingerprints and facial recognition. The U.S. military also said a DNA analysis was also being performed, but emphasized there was no doubt that he was in the house that was hit.

CBS News national security correspondent David Martin reported that officials say the United States had been tracking a key aide to al-Zarqawi — his spiritual adviser, Sheikh Abed al Rahmen — to the area of Baqouba, a town about 30 miles northeast of Baghdad.

The U.S. got a specific tip on Wednesday, apparently from someone inside al-Zarqawi's own organization, Martin reported. That tip said al-Zarqawi would be meeting with his top aides in a specific house, on the outskirts of Baqouba. That's when the air strike was called in, Martin said.

The building was hit with two 500-pound laser-guided bombs that were dropped by U.S. Air Force jets. Iraqi police were the first on the scene. They pulled al-Zarqawi's body from the wreckage and the process of identification began, Martin said.

Leaders inside Iraq largely hailed al-Zarqawi's death as a victory. "Those who disrupt the course of life, like al-Zarqawi, will have a tragic end," al-Maliki said. He also warned those who would follow the militant's lead that "whenever there is a new al-Zarqawi, we will kill him.

"This is a message for all those who embrace violence, killing and destruction to stop and to (retreat) before it's too late. It is an open battle with all those who incite sectarianism."

Khalilzad added that "the death of Abu Musab al-Zarqawi is a huge success for Iraq and the international war on terror." He also gave a thumbs-up and said it was a good day for America.

"In some ways this is very good news for al Qaeda, because al Qaeda's forces in Iraq will now focus more on Americans and the Iraqi government, (rather) than on simply killing Shias because they're heretical people," Scheuer told CBS News' The Early Show.

"It's very good news for America. But in terms of the Iraqi insurgency, the insurgency probably will return to more military-related targets now," Scheuer added.

While leaders in Iraq said the killing was a major victory, Iraqi citizens had mixed reactions.

"If it's true al-Zarqawi was killed, that will be a big happiness for all the Iraqis," said college student Thamir Abdulhussein. "He was behind all the killings of Sunni and Shiites. Iraqis should now move toward reconciliation. They should stop the violence."

Amir Muhammed Ali, a 45-year-old stockbroker in Baghdad, was skeptical that al-Zarqawi's death would end the unrelenting violence in the country.

"He didn't represent the resistance, someone will replace him and the operations will go on," he said.

In the past year, al-Zarqawi moved his campaign beyond Iraq's borders, claiming to have carried out a Nov. 9, 2005, triple suicide bombing against hotels in Amman, Jordan, that killed 60 people, and even a rocket attack from Lebanon into northern Israel.

The U.S. military said an Egyptian-born man he identified as Abu al-Masri will probably take over al Qaeda in Iraq. Al-Masri trained in Afghanistan and probably came to Iraq in 2002, probably helping to establish the first al-Qaeda cell in Baghdad.

Since his emergence following the U.S.-led invasion of Iraq, al-Zarqawi had become Iraq's most wanted militant, as notorious as Osama bin Laden, to whom he swore allegiance in 2004. The United States put a $25 million bounty on al-Zarqawi, the same as bin Laden.

Since the tip was provided by a man who was a member of al-Zarqawi's organization, it is very unlikely he will see any of that $25 million reward, Martin reported.

His fighters led a wave of kidnappings of foreigners, killing at least a dozen, including Arab diplomats and three Americans. Al-Zarqawi is believed to have wielded the knife in the beheadings of two of the Americans, Nicholas Berg and Eugene Armstrong, and earned himself the title of "the slaughtering sheik" among his supporters.

Nevertheless, there is some hope within Iraq. Al-Zarqawi was committed to fighting not only Western civilization, but also Shia Muslims who make up 60 percent of Iraq's population, Palmer reported. Now that he is dead, there's hope that other Sunni insurgent groups who are fighting with him may be convinced somehow to lay down their arms, and perhaps even join the government, Palmer said.