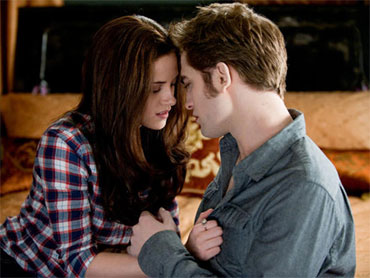 In the world of entertainment, 2010 proved quite interesting. We saw Lady Gaga in her meat dress, Snooki and The Situation popped up all over the place, and Lindsay Lohan took many trips to rehab.

On "The Early Show on Saturday Morning" on New Year's Day, Amy Palmer, senior editor of InTouch Weekly, offered her predictions for pop culture in 2011.

Q: Who do you think we will see a lot of in 2011?
A: Kim Kardashian is going to keep getting bigger and bigger. Natalie Portman is going to have a huge year. "Black Swan" was recently released and I just have a feeling we are going to see a lot from her in 2011. James Franco is hosting the Oscars; he isn't going anywhere. (We'll see more of) the guys from "The Hangover" like Bradley Cooper. And Lady Gaga. She is releasing a new album that she is calling the best album of all time.

Q: Whose 15 minutes of fame is up?
A: The Situation. I think the show is huge, but I think he will be done. All the hype around him is going to die. His book flopped and I think people are just over him.

Q: Everyone loves the juicy hook-ups and break-ups. What celebrity hook-up will we be most surprised by this year?
A: It'll be very interesting to see who Kim Kardashian ends up with this year. Zac Efron is newly single. People are always looking to see if Jennifer Aniston will find love. And Ryan Reynolds and Scarlett Johansson divorced after being married for two years and they are two huge stars to watch.

Q: Any break-ups?
A: Fergie and Josh Duhamel. I think they have had a rough year and we are going to see it come to an end in 2011.

Music:
Q: The Grammy Awards are a month away. Eminem made a huge comeback and is in the lead with 10 nominations followed by Bruno Mars with seven. What can we expect from music this year?
A: I really think country is going to have a pretty big year. Country is going main stream. Taylor Swift, Lady Antebellum, Carrie Underwood. I think country music is going to have a huge year.

TV:
Q: Let's talk reality television. Are there any new shows in the works?
A: Paula Abdul's new show will be really big. Simon Cowell's new show will go head-to-head with "American Idol." And even "American Idol." They have brand new judges. "The Sing Off" has been doing very well. I think it is going to be a very interesting year in reality talent competition shows.