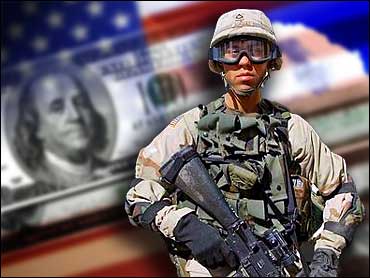 The Bush administration is refusing to produce any estimate of the possible cost of war and rebuilding in Iraq, which a series of outside studies have placed at anywhere from $50 billion to more than a trillion dollars.

The White House maintains that any estimate now would be no more than a guess, since the timing and length or war, and the duration and nature of post-war peacekeeping and reconstruction, are unknown.

But some in Congress contend that they must be given some idea what the war will require.

"The bottom line is we need a better and fuller understanding of the financial commitments we are undertaking, and how much of these costs our allies are willing to bear," Rep. Chris Shays, a Connecticut Republican who chairs the House Budget Committee, told a hearing Thursday on the administration's defense budget — which requests no funding for the war or its aftermath.

Deputy Defense Secretary Paul Wolfowitz countered that, "Such estimates are so dependent on future, unpredictable circumstances as to be of little value."

Wolfowitz's refusal to talk dollars and cents infuriated some Democrats, like Virginia's James Moran, who according to the New York Times said the deputy secretary was "deliberately keeping us in the dark."

In the absence of an official White House estimate, members of Congress must choose from a wide range of outside studies and media reports.

The Congressional Budget Office said in September that a month-long conflict might run $22 billion to $29 billion, but Democrats on the House Budget Committee put it somewhat higher, at $30.6 billion to $48.3 billion.

The reason for the range is the vast number of variables to be considered. Much depends on how long the war would take, which requires guessing how easy it will be for the U.S. to defeat Iraq.

It's also unclear how long the U.S. will maintain a presence in post-war Iraq, and how many troops will have to be there. This week, Army chief of staff Gen. Eric Shinseki guessed "several hundred thousand" soldiers could be needed, but Rumsfeld predicts far fewer will be required.

Reflecting on those varied possibilities, White House spokesman Ari Fleischer said Wednesday that the cost will "depend on a number of factors, many of them up to Saddam Hussein and to Saddam Hussein's henchmen."

"If (the henchmen) don't follow their orders from Saddam Hussein, that can lead to one scenario," he said. "And so it is too soon to say with precision how much this war will cost."

After the war, how much will the U.S. spend not just to protect Iraq, but to rebuild it? Will Iraq's oil reserves help cover this cost? That depends on how much of the oil survives the war intact, and on the vagaries of the oil market.

The variation also reflects different ideas of what the war's cost encompasses. Some studies guess only at what the actual deployment will cost the government, while others try to gauge how a potentially long war and a possible oil price spike might affect the overall economy.

For example, at the high end of estimates is a report by the American Academy of Arts and Sciences, which sees a short war going for $99 billion and a long one costing as much as $1.9 trillion, when all the effects of war trickle out over a decade.

But as Wolfowitz reminded Congress, there may be a price tag associated with avoiding conflict.

"The possible cost of war in Iraq should be considered in the context of America's other international undertakings of recent years. We must remember that there is a cost of containment in both dollars as well as risk to our national security," Wolfowitz argued.

He added that the value of defeating Saddam has to be weighed in any discussion of war's cost.

At least to date in its public statements, the White House is not precluding that a cost estimate will emerge at some point.

"Because we take it seriously, I'm not in a position to speculate what the number may be," he said.
By Jarrett Murphy