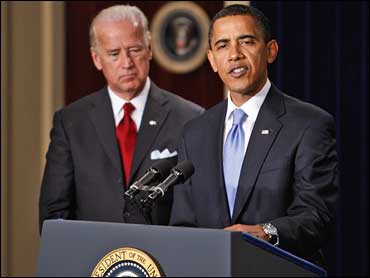 This column "On The Marc" is written by CBS News chief political consultant Marc Ambinder.


Imagine that one hundred days or have passed, and you're in the alcove of the White House awaiting your next mission.

What, realistically, does President Obama hope to have gotten done by then?

Aides hope that the massive stimulus package, having been passed and signed, will be stimulatin' away, although by May 1 there will be an effort by the government to sell the plan's effects to the American people.

The theory is that people need to have confidence that the money is being put to good use now - and that it will keep interest rates in check.

The next big priority will be financial regulation restructuring. The hope is to have the law ready by April.

The political will is there, but the subject is very complex and lobbyists will pour over this issue like ants on a lump of sugar.

Mr. Obama will have either issued an executive order on stem cells, or Congress will have passed legislation that expands the lines available for research.

Conservative Democrats hope that Mr. Obama will have signed tough new budgeting rules into law -- whether these rules are included in the budget process or whether they're promulgated separately is unknown.

Health care will be making progress, and the contours of the legislation Mr. Obama would eventually sign would be made clear.

So… what might be stalled? What will be a big challenge?

Progress on his national security and foreign policy initiatives will be slight. Mr. Obama will probably have directed his generals to present him with a withdrawal strategy for Iraq, but the larger and more complex question is what strategy to adopt in Afghanistan.

Some generals and administration advisers want an Iraq-like counterinsurgency doctrine. Others believe that Mr. Obama needs to immediately begin talks with friendly Afghan Pashtuns (if there are any) and Iran, which sits, twiddling its thumbs, on Afghanistan's Western border.

In his campaign, Mr. Obama promised a surge of troops to Afghanistan. Whether he will act on his promise is by no means certain.

And my guess is that Democrats will spar amongst themselves on the next step in reviving the domestic auto industry.

And then, on major energy legislation. The Democrats failed miserably in their effort to pass a cap-and-trade regime in 2008. Although public support is there, the desire and will to change this system during the active phase economic crisis isn't.

Mr. Obama believes that the public needs to be educated on what will happen -- where they'll pay more, when they should expect to pay less -- and that will take a while.

And just how will Mr. Obama govern from the center?

He'll reach out to people - but he'll have to do more than talk to them. If he wants bipartisan cooperation, he'll need to incorporate bipartisan concerns in the legislation he advances and the orders he signs.

Doing so will put his political opponents in a bind - if Mr. Obama is perceived as being cooperative, then his opponents will look shrill if they reflexively oppose Mr. Obama's agenda.

One critical sign of whether Mr. Obama plans to play nicely is whether he relaxes these mandates.

In addition, the Employee Free Choice Act, or "card check" legislation to make it much easier for unions to organize, will be a critical test of whether there is a conflict between Mr. Obama's desire to build coalitions, and his desire to get big things done.
By Marc Ambinder