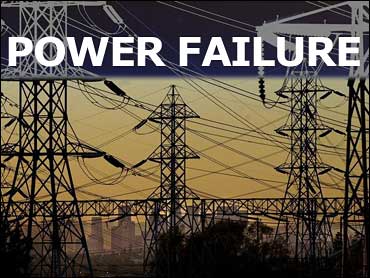 Hours after the blackout hit, officials were still speculating late Thursday what caused the system to fail, with investigators concentrating on areas in neighboring Canada and upstate New York.

Canadian officials said they think lightning struck a power plant in the Niagara region on the United States' side of the border, but some American officials said only that the problem appeared to be along the transmission line linking New York and Ontario.

Whatever happened, the power disruption, which caused havoc from New England to Michigan, is certain to revive the debate over the reliability of an aging electricity transmission system.

``More lines clearly need to be built,'' said Jim Owen, a spokesman for the Edison Electric Institute, which represents the investor-owned electric utilities.

``We're the world's greatest superpower, but we have a Third
World electricity grid,'' said Richardson, governor of New Mexico.

An energy bill before Congress would allow federal regulators to step in and direct transmission siting if states or regions were unable to do so. But that provision has been opposed by many lawmakers.

While high temperatures and humidity across the Northeast caused electricity use to surge Thursday, the increased demand was not putting extreme strain on the system, some officials said.

Matthew Melewski, a spokesman for the New York Independent System Operator, the organization that manages the state's electricity grid, said demand across the state was about 29,000 megawatts, several thousand megawatts below the system's capacity, when the blackout hit at 4:11 p.m. EDT.

The problem may have stemmed from an act of nature.

A spokesman for Canadian Prime Minister Jean Chretien said that the blackout likely began with a lightning strike on part of a power plant in the Niagara region of upstate New York.

U.S. officials were not ready to confirm that as a cause.

The Energy Department issued a statement saying it was working with a variety of federal, state, regional and industry groups ``to assess the situation'' and determine a cause.

Steven Whitley, chief operating officer of ISO-New England, which manages that region's grid, said the disturbance appeared to be triggered by an event somewhere on the transmission line between New York and Ontario, but that the exact failure had not been determined.

``Preliminarily we're looking at this as a possible transmission problem from Canada to the U.S.,'' said New York Gov. George Pataki's spokeswoman, Lisa Dewald Stoll. She said the problem appeared to be in Canada, but she had no details.

Phillip Harris, president of the PJM power grid system, which serves seven states in the mid-Atlantic region, said the grid ``experienced a frequency shift'' at 4:11 p.m. EDT causing ``a flow of power northward out of New York.''
Harris said it was too early to determine what trigged the sequence of events, but that automatic safeguards prevented the problem from spreading further south and west, although some parts of his system in New Jersey and northeastern Pennsylvania were affected.

``For some reason there was a power failure in northern New York or southern Canada. That cascaded down through the system,'' said New York Mayor Michael Bloomberg.

Officials said it was important to find a cause and rectify any shortcomings that may have led to the failure.

``We don't want this ever to happen, but it did and we have to find out why,'' said Whitney, the New England grid management group spokesman.

Social Security's cost-of-living bump could be near 11%: Report
Thanks for reading CBS NEWS.
Create your free account or log in
for more features.
View CBS News In
CBS News App Open
Chrome Safari Continue
Be the first to know
Get browser notifications for breaking news, live events, and exclusive reporting.