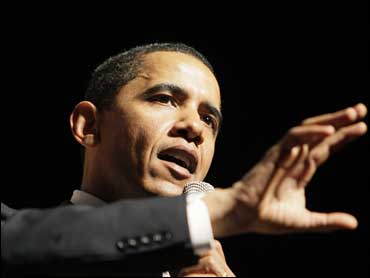 This story was written by Kenneth P. Vogel.


During his first run for elected office, Barack Obama played a greater role than his aides now acknowledge in crafting liberal stands on gun control, the death penalty and abortion- positions that appear at odds with the more moderate image he's projected during his presidential campaign.

The evidence comes from an amended version of an Illinois voter group's detailed questionnaire, filed under his name during his 1996 bid for a state Senate seat.

Late last year, in response to a Politico story about Obama's answers to the original questionnaire, his aides said he "never saw or approved" the questionnaire.

They asserted the responses were filled out by a campaign aide who "unintentionally mischaracterize(d) his position."

But a Politico examination determined that Obama was actually interviewed about the issues on the questionnaire by the liberal Chicago non-profit group that issued it. And it found that Obama - the day after sitting for the interview - filed an amended version of the questionnaire, which appears to contain Obama's own handwritten notes adding to one answer.

The two questionnaires, provided to Politico with assistance from political sources opposed to Obama's presidential campaign, were later supplied directly from the group, Independent Voters of Illinois - Independent Precinct Organization. Obama and his then-campaign manager, who Obama's campaign asserts filled out the questionnaires, were familiar with the group, its members and positions, since both were active in it before his 1996 state Senate run.

Through an aide, Obama, who won the group's endorsement as well as the statehouse seat, did not dispute that the handwriting was his. But he contended it doesn't prove he completed, approved - or even read - the latter questionnaire.

"Sen. Obama didn't fill out these state Senate questionnaires - a staffer did - and there are several answers that didn't reflect his views then or now," said Tommy Vietor, a spokesman for Obama's campaign, in an emailed statement. "He may have jotted some notes on the front page of the questionnaire at the meeting, but that doesn't change the fact that some answers didn't reflect his views. His eleven years in public office do."

But the questionnaires provide fodder to question Obama's ideological consistency and electability. Those questions are central to efforts by Obama's presidential rival Hillary Clinton to woo the superdelegates whose votes represent her best chance to wrest the Democratic nomination from Obama.

Taken together - and combined with later policy pronouncements - the two 1996 questionnaires paint a picture of an inexperienced Obama still trying to feel his way around major political issues and less constrained by the nuance that now frames his positions on sensitive issues.

Consider the question of whether minors should be required to get parental consent - or at least notify their parents - before having abortion.

The first version of Obama's questionnaire responds with a simple "No."

The amended version, though, answers less stridently: "Depends on how young - possibly for extremely young teens, i.e. 12 or 13 year olds."

By 2004, when his campaign filled out a similar questionnaire for the IVI-IPO during his campaign for U.S. Senate, the answer to a similar question contained still more nuance, but also more precision. "I would oppose any legislation that does not include a bypass provision for minors who have been victims of, or have reason to fear, physical or sexual abuse," he wrote.

The evolution continued at least through late last year, whn his campaign filled out a questionnaire for a non-partisan reproductive health group  that answered a similar question with even more nuance.

"As a parent, Obama believes that young women, if they become pregnant, should talk to their parents before considering an abortion. But he realizes not all girls can turn to their mother or father in times of trouble, and in those instances, we should want these girls to seek the advice of trusted adults - an aunt, a grandmother, a pastor," his campaign wrote to RH Reality Check.

"Unfortunately, instead of encouraging pregnant teens to seek the advice of adults, most parental consent bills that come before Congress or state legislatures criminalize adults who attempt to help a young woman in need and lack judicial bypass and other provisions that would permit exceptions in compelling cases."

Both versions of the 1996 questionnaires provide answers his presidential campaign disavows to questions about whether Obama supports capital punishment and state legislation to "ban the manufacture, sale and possession of handguns."

He responded simply "No" and "Yes," respectively, to those questions on both questionnaires.

But a fact sheet provided by his campaign flatly denies Obama ever held those views, asserting he "consistently supported the death penalty for certain crimes, but backed a moratorium until problems were fixed." And it points out that as a state senator, he led an effort to reform Illinois' death penalty laws.

On guns, the fact sheet says he "has consistently supported common sense gun control, as well as the rights of law-abiding gun owners."

After Politico's story on the first questionnaire, Clinton aides seized on the handgun-ban answer in particular, which a campaign press release asserted called into question Obama's electability.

That was a curious argument to make in a Democratic primary. But Republicans will certainly seek to make it in the general election if Obama is the Democratic standard-bearer against the presumptive GOP nominee, Arizona Sen. John McCain.

It could also provide ammunition for a line of attack quietly peddled for some time by Republicans. They allege Obama has a penchant for blaming his staff for gaffes ranging from missing a union event in New Hampshire to circulating opposition research highlighting the Clintons' ties to India and Indian-Americans to underestimating the amount of cash bundled for his campaigns by his former fundraiser, indicted businessman Antoin "Tony" Rezko.

And the questionnaires play into storylines pushed by both Republicans and Clinton suggesting Obama has altered his views to appeal to differing audiences.

That suggestion is galling to many members of IVI-IPO, some of whom have relationships with Obama that date back nearly 15 years. The group had endorsed Obama in every race he'd run - including his failed long-shot 2000 primary challenge to U.S. Rep. Bobby Rush (D-Ill.) - until now.

The group's 37-member board of directors, meeting last year soon after Obama distanced himself from the first questionnaire, stalemated in its vote over an endorsement in the Democratic presidential primary. Forty percent supported Obama, 40 percent sided with Clinton and 20 percent voted for other candidates or not to endorse.

"One big issue was: Does he or does he not believe the stuff he told us in 1996?" said Aviva Patt, who has been involved with IVI-IPO since 1990 and is now the group's treasurer. She volunteered for Obama's 2004 Senate campaign, but voted to endorse the since-aborted presidential campaign of Rep. Dennis Kucinich (D-Ohio) and professed disappointment over Obama's retreat from ownership of the questionnaire.

"I always believed those to be his views," she said, adding some members of the bord argued Obama's 1996 answers were "what he really believes in and he's tailoring it now to make himself more palatable as a nationwide candidate."

It's more benign than that, contended fellow board member Lois Dobry, who voted to endorse Obama last year and hosted the 1996 interview session at her home.

That "was a long time ago," she said. "And anybody who hasn't refined their ideas over that period of time … is not anybody I'm interested in," she said. Dobry asserted Obama's views have evolved mostly at the margins and that he's still the same person she met in the 1990s.

"He always was right from the start very, very clear on where he was coming from on most issues," she said, "and he certainly wasn't letting anybody else decide that for him."

Dobry, Patt and current IVI-IPO state chairman David K. Igasaki, a Clinton supporter, agreed Obama likely didn't write every word of his campaign's 1996 answers. But they all dismissed as unbelievable his presidential campaign's assertion that Obama never saw or signed off on the state Senate questionnaires.

Campaigns are routinely bombarded with all manner of questionnaires from advocacy groups of every stripe, so it's not uncommon to have staffers fill them out in candidates' names. But usually there's some process by which the answers are vetted to insure consistency with the candidates' views.

And there were plenty of reasons to believe that occurred in the case of Obama's 1996 IVI-IPO questionnaire.

The group was very influential in Obama's South Side district. It also was a leader on government reform issues, which Obama has made a centerpiece of his political persona.

He and his campaign manager, Carol Harwell, both were active with IVI-IPO prior to his candidacy, and had once helped interview candidates seeking the group's endorsement, according to Igasaki.

Dobry called Harwell "an extremely experienced person, also someone highly familiar with IVI. And she would know perfectly well that the candidate would have to answer questions based on these answers and to suddenly have the candidate discover that somebody else had written answers that they were in no way in agreement with would be pretty embarrassing, right?"

Harwell, a veteran Democratic operative who got her start working for the late Chicago Mayor Harold Washington in the 1980s and now works for Cook County Clerk David Orr, last year told Politico she filled out the first questionnaire.

But she did not return several telephone messages asking about the second questionnaire and the handwritten notes on it.

They appear under a question asking candidates to "list all endorsements you have received so far." In typed text that matches that of the rest of the answers, both of Obama's questionnaires list four local Democratic organizations and two aldermen. But the latter questionnaire adds to that with hand-written notes listing another 10 endorsements, including an Illinois seniors group, AFSCME, AFL-CIO, Sierra Club, IBEW and unions representing nurses and firefighters.

Igasaki said Obama was shoo-in for the IVI-IPO endorsement, but that it was important to have a strong showing because "our chapter basically was his field operation. … Those people were already working for him and it was important for him to identify with us."

Patt, though, conceded the inevitability of the group's endorsement could have led Harwell to be "less than 100 percent careful" in filling out the questionnaire "because it probably didn't matter that much at the time. It's only in the context that it's now found that has much greater importance than anyone could have imagined it would back in 1996."
By Kenneth P. Vogel