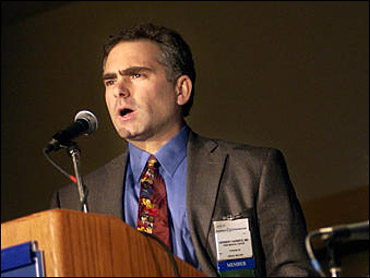 For the first time, doctors have convincingly shown that blocking tumors' blood supply can help cancer patients live longer, at last proving a theory that has cycled through years of hope and frustration.

The idea - the lifelong quest of Harvard's Dr. Judah Folkman - is that cancer needs a growing network of blood vessels to survive. Shutting down this process, called angiogenesis, should arrest tumors and even obliterate them.

After decades of obscurity, Folkman's theory became front-page news in 1998 with reports that his angiogenesis-blocking drugs cured mice. Some predicted he was on the verge of curing human cancer, too.

But proving that has been difficult. Despite much research, many drugs aimed at tumors' blood supply have failed to show a meaningful effect in people.

However, on Sunday, researchers released a study of Genentech's experimental angiogenesis stopper, Avastin. The company announced two weeks ago that the results looked good, but it withheld the details until a meeting in Chicago of the American Society of Clinical Oncology.

"This is a landmark announcement," said Dr. William Li, head of the nonprofit Angiogenesis Foundation. "It's the first true validation in a well-designed clinical trial that cutting off a tumor's blood supply can improve cancer survival."

It is not a cure. Nevertheless, the drug modestly lengthened survival, which is notable in a field where even inch-by-inch improvement can be hard to document.

The treatment is an antibody aimed against vascular endothelial growth factor, or VEGF, one of the more than 20 chemicals that help tumors' blood vessels grow and survive.

The study, directed by Dr. Herbert Hurwitz of Duke University, involved 925 colon cancer patients who all received a standard chemotherapy cocktail of irinotecan, 5-fluorouracil and leucovorin. They were also randomly given either Avastin or dummy placebo.

Those on Avastin survived an average of 20 months, compared to nearly 16 months in those getting only standard treatment. The results were a surprise, since an earlier study found no benefit of Avastin against breast cancer.

"I think this drug has a very important future," said Dr. Margaret Tempero of the University of California, San Francisco, and incoming president of the oncology group. "I'm very impressed with the increase in survival."

While an extra four months of life may seem tiny, for someone facing death, even an extra few months are important.

Dr. Mace Rothenberg of Vanderbilt said that when he was in medical school, such patients typically survived just six months. "This improves median survival by about 30 percent," he said. "When you put it in those terms, it is very meaningful to patients."

Hurwitz said his study supports the theory that attacking tumors' blood supply is a worthwhile strategy. But he and others cautioned that the approach, at least so for, is hardly a grand slam for cancer therapy.

"We did not cure patients," Hurwitz said. "We have a long way to go. An opponent like cancer does not take prisoners."

Doctors believe that angiogenesis fighters will almost certainly have to be combined with standard chemotherapy. And to be truly effective, doctors may have to pool several medicines that fight blood vessel formation in different ways.

Many in the field believe there eventually will be more choices. Li noted that at least seven other drugs intended to thwart angiogenesis in various ways have failed large-scale cancer testing. But more than 60 others are now in human study, including at least eight others that, like Avastin, attack VEGF.

Makers of some of these seemed pleased with their competitor's success.

"We are very excited about the Avastin news. It provides proof of concept that angiogenesis inhibition can result in clinical benefit," said David Guy, head of strategic marketing at Novartis.

His company's PTK787, which blocks VEGF in a different way than Avastin, is entering large-scale testing, and results should be ready in three years.

A main advantage of these drugs is they carry fewer side effects than standard chemotherapy. Avastin's main problem was a usually mild acne-like rash.