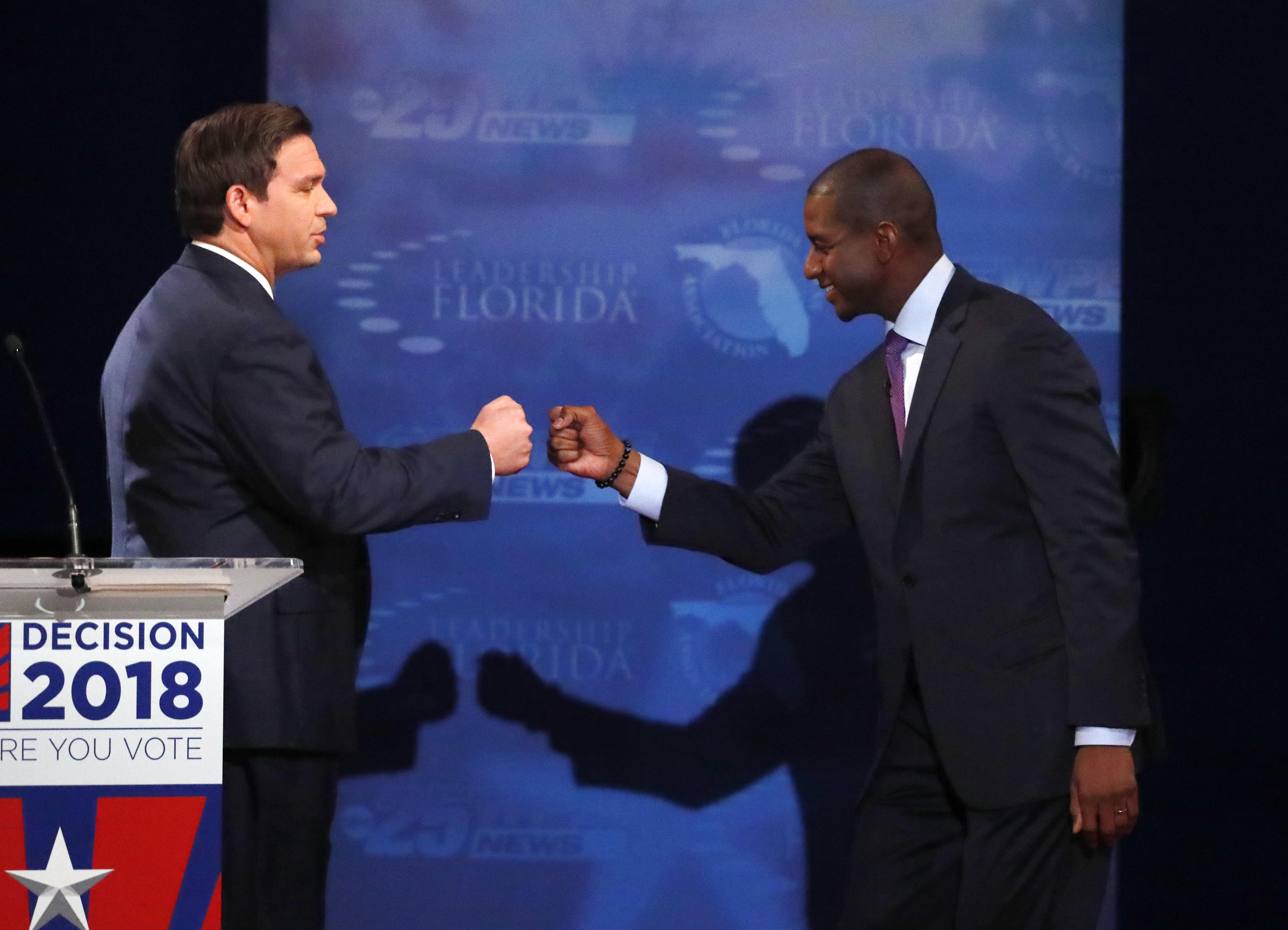 The race for Florida governor now appears to be over, while the Senate race between Gov. Rick Scott and Sen. Bill Nelson, as well as the agriculture commissioner race moved on to another recount Thursday.

But Nelson's path to victory narrowed significantly Friday morning when Judge Mark Walker ruled that guidelines provided by Florida law to election canvassing boards as to how to determine voter intent in a manual recount are constitutional. Walker also denied a request for Scott to recuse himself from election matters.

Here's a rundown on the latest developments.

Florida's deadline for the machine recount was 3 p.m. Thursday, and while most of the 67 counties finished and submitted the new results in time, Broward County missed the deadline by two minutes, submitting its machine recount at 3:02 p.m. The state rejected Broward's submission.

"Since Broward did not meet the deadline required by law, the first unofficial returns take the place of the second unofficial returns," the Department of State said in a statement Thursday. Now, the initial results submitted on Saturday will be considered instead.

Broward Election Supervisor Brenda Snipes has faced sharp criticism for her handling of the midterm elections. Among other reasons, Broward's votes were counted more slowly than the majority of the other counties in the state. People on social media have been harassing Snipes, posted Snipes' home address and phone number sites including Facebook.

Palm Beach County also failed to make the 3 p.m. deadline and submitted its original results instead. Its tallying machines overheated, causing mismatched results with the recount of 174,000 early voting ballots and forcing staffers to redo their work.

Hillsborough County, too, chose to submit its original results, rather than its machine recount. Craig Latimer, the elections supervisor for Hillsborough, said the county's recount came up with 846 fewer votes than the first count, according to the Tampa Bay Times .

"We are not willing to accept that votes go unreported," Latimer said, in explaining why the county submitted its original count to the Department of State.

The Florida secretary of state alleges voting irregularities occurred in four counties, including Broward. The Florida Department of State on Friday asked U.S. attorneys to investigate the irregularities, attaching an example that appeared to show a Florida Democratic Party volunteer advising a mail-in voter to deliver a voter affadavit by 5 p.m. on Thursday, Nov. 8, two days after the election. However, that information was incorrect, since the affadavits were due on the day before the election, on Nov. 5.

Four county supervisors turned over information that showed Democratic Party operatives changed official forms to say that voters had until two days after the election to fix any problems with mail-in ballot signatures. Under current law, a voter has until the day before Election Day to fix a problem.

Walker ruled Thursday that voters whose mail-in or provisional ballots were rejected because the signatures didn't match those on file will now have until Saturday at 5 p.m. to fix their ballots. Soon after the ruling, Scott appealed it.

In granting the preliminary injunction, Walker wrote that the issue "is whether Florida's law that allows county election officials to reject vote-by-mail and provisional ballots for mismatched signatures—with no standards, an illusory process to cure, and no process to challenge the rejection— passes constitutional muster. The answer is simple. It does not."

Democrats and Nelson argued that rejecting the ballots without standards for fixing them violates the Constitution's equal protection clause. They wanted all the voided ballots to be counted, a proposal rejected by Walker.

The state of Florida argued that Nelson had waited too long to file the suit and that delaying the results would cause irreparable harm.

State officials said the matching requirement led to the voiding of nearly 4,000 ballots, although that figure did not include larger counties such as Miami-Dade, and it is smaller than the margin of about 13,000 votes separating Scott and Nelson. That's a margin of 0.15 percent. Should that margin hold, there will be a hand recount, and the deadline for that is currently Sunday. It is not clear how or whether the court's extension will affect Thursday's deadline for the machine recount.

Walker ruled on Thursday afternoon in another case denying a request by the Nelson campaign to extend the machine recount deadline for all 67 counties in Florida.

Where it goes from here

Gillum is still calling for every legal vote to be counted by the state. "As today's unofficial reports and recent court proceedings make clear, there are tens of thousands of votes that have yet to be counted," he said in a statement Thursday.

"We plan to do all we can to ensure that every voice is heard in this process. Voters need to know that their decision to participate in this election, and every election, matters. It is not over until every legally casted vote is counted."

Scott agreed to step down from the state panel responsible for certifying the final results. Scott has also suggested fraud may be taking place in some counties. Critics have said Scott should have no role in overseeing the election given his close contest.

The League of Women Voters of Florida and another group had filed a lawsuit that sought to remove Scott from any official control over the election. Scott appoints the state's chief election official responsible for ordering recounts. Ballots, however, are counted by local election officials.

No less than six federal lawsuits have been filed so far in Tallahassee. Nelson's campaign has also filed a lawsuit seeking public records from a north Florida elections supervisor who allowed voters in GOP-heavy Bay County to email their ballots in apparent violation of state law.

Judge Walker, citing a well-known "Star Trek" episode about rapidly-reproducing furry aliens, said during one election lawsuit hearing Wednesday that "I feel a little bit like Captain Kirk in the episode with the Tribbles where they start to multiply." He began his third hearing of the day by correcting himself: "The lawyers are multiplying like Tribbles - not the lawsuits."

Scott was in Washington, D.C., while the court battles rage on. He stood at Senate Majority Leader Mitch McConnell's left shoulder Wednesday when the Kentucky Republican welcomed GOP senators who will take their seats in January when the new Congress is sworn in.