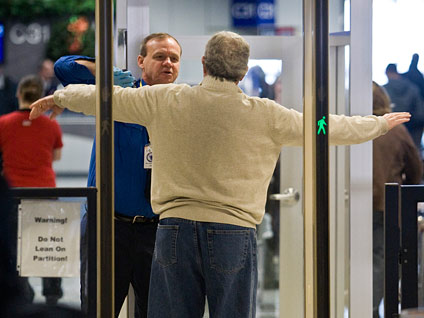 About 1.62 million people are expected to take to the skies over the Thanksgiving weekend, according to AAA. For many, it will be their first experience flying since the Transportation Safety Administration instituted its controversial new scanning and enhanced pat down procedures.

So how ugly is it going to get out there? It depends. A group opposed to the new security procedures has organized a "national opt-out day" for Wednesday encouraging people to opt out of the new Advanced Imaging Technology scanners.

Those who do will be among the group that has to go through an enhanced pat-down to board their flight. If a significant number of people participate in opt-out day - which is described in part as "the day ordinary citizens stand up for their rights, stand up for liberty, and protest the federal government's desire to virtually strip us naked" - it could lead to significant slowdowns at security checkpoints.

It seems unlikely, however, that that opt-out day will ultimately cause a major disruption. A majority of Americans say they supportthe use of the full-body scanning machines; many of those who oppose their use will likely endure the experience with clenched teeth rather than complicate their efforts to make it to their flight. (The TSA says that less than one percent of passengers have opted out of the new scanners thus far.)

In addition, there is a good chance that many Americans won't even see a full-body scanner: There are currently 400 scanners in operation at 69 airports, according to the TSA. There are about 450 airports in use in the United States. TSA's list of which airports have the scanners in use is here.

You'll note that the new scanners are present in many of the nation's larger airports, which increases the likelihood that an American will go through one. However, not every lane of every checkpoint at the 69 airports in question has one of the new scanning machines - some folks at these airports will still go through standard metal detectors.

Ultimately, most Americans will simply go through many of the steps they've gone through in the past: Shoes off, laptops out, making sure they have no containers of liquid greater than 3.4 ounces in their carry-on bags. They may find themselves going through a scanner instead of a metal detector, but most will follow the rules and go on their way.

For those who do go through a scanner, it will be important to empty their pockets of everything, since any foreign object shows up on the scan - and increases the likelihood of a subsequent pat down. Those who enter the scanner will be expected to lift up their arms while the machine does its work. (Check out the video at left.)

Their image is sent to a screener in a closed room who reviews the scan and uses a radio to relay any concerns to the TSA agent at the security checkpoint. As CBS News correspondent Bob Orr's report at left shows, what screeners see is a black-and-white x-ray style image - detailed enough to make some uncomfortable (critics call it a "virtual strip search") but seemingly not detailed enough to identify an individual. The TSA says the images are not stored.

There are actually two types of scanning machines - one of which, the "backscatter," emits a small amount of radiation. Though the Food and Drug Administration and others have deemed the machines safe, pilots and some others have expressed concerns that repeated exposure could pose a health risk.

If a passenger opts out of a scan or the TSA agents decide they need to check a person despite having gone through a scan or metal detector, he or she will be subject to an enhanced pat down. This will be rare, according to the TSA - it says less than three percent of all travelers go through that process. The TSA also says children 12 and under will receive a "modified" pat down - presumably one that is less invasive than for adults.

"Only passengers who alarm a walk through metal detector or AIT machine or opt out of the AIT receive a pat-down," the TSA says. "For this reason, it is designed to be thorough in order to detect any potential threats and keep the traveling public safe. Pat-downs are performed by same-gender officers and all passengers have the right to a private screening with a travel companion at any time."

The TSA has posted "Holiday Travel Tips" that include a recommendation that passengers use its crowd-sourced "MyTSA" App to gauge wait times and familiar tips about travel from before the new procedures were put in place. (Make sure those liquids are in a clear quart-sized sealable bag!)

The tips page also notes that gifts may need to be unwrapped - keep that one in mind for December travel - and limits on food that can be carried onto an airplane. (Here's something you might not have known: No snow globes allowed.)

Ultimately everyone's experience at the airport will be different, and whether you face a short or long security line - or a delayed or on-time flight - comes down largely to luck. If your experience in the security line doesn't match what the TSA promises, don't worry: They say that's (mostly) on purpose.

"You may notice your screening experience at one airport doesn't match the experience of another airport," the TSA says. "We realize this happens, and some of it is intentional. While it can be a little confusing for our passengers, it also makes things unpredictable for those who might wish to do us harm. Our officers also can use their discretion in different scenarios that allows them to use common sense and not abide by a checklist mentality that can be studied and defeated by those who wish to do us harm."