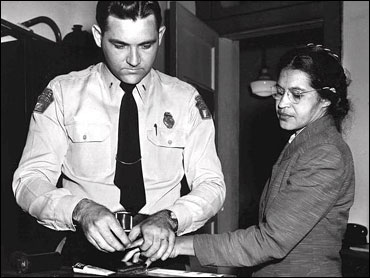 In 1776, the Continental Congress awarded the first Congressional Gold Medal of Honor to General George Washington, a bold and determined man who had the courage to lead his country into battle for its freedom but who lacked the wisdom to recognize that the promise of the American Revolution would never be fully realized for so long as African Americans were second-class citizens.

In 1999, two hundred and twenty three years after Washington was recognized by the Continental Congress, its successor, the 106th Congress, voted overwhelmingly to award the same Congressional Gold Medal of Honor that had once been given to the man know as The Father of His Country to the woman who will forever be known as the Mother of the Civil Rights Movement.

With her December 5, 1955, refusal to give up her seat on a Montgomery, Alabama, city bus to a white passenger, Rosa Parks triggered a boycott by African Americans of the municipal bus system that lasted more than a year and inspired the movement that forced the end of the officially-sanctioned segregation that had created an apartheid system in the American south. For that, and for her resolute commitment to carry on the struggle for social and economic justice throughout a long life of fighting discrimination based on race, class, sex and sexuality, Parks received many awards, all of them richly deserved.

But Parks, who died Monday at age 92, never needed those honors as much as America needed to bestow them.

And no recognition of Parks was more necessary than the awarding of that Congressional Gold Medal of Honor in 1999.

The American Revolution was not an event but rather a promise of freedom. That promise may have been made by a Virginia plantation owner and his white male compatriots. But it was realized by an African American seamstress from Montgomery, Alabama, who refused to believe that that promise did not apply to her.

President William Jefferson Clinton, who was named for the greatest of Washington's comrades in that struggle for freedom, and who presented the medal to Parks on June 15, 1999, gave voice to that reality when he explained to the crowd that gathered in the Capitol Rotunda to celebrate the honor that, "In so many ways Rosa Parks brought America home to our founders' dream."

It was not merely appropriate that Rosa Parks receive the same recognition as George Washington had been accorded. It was essential, for without Parks and those who joined her in forging the civil rights movement of the 1950s and 1960s, Washington's promise of freedom would have remained forever constricted by the overt chains of slavery and the covert chains of segregation.

Reprinted with permission from The Nation