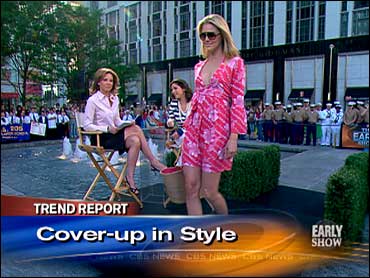 In recent months, America has witnessed a wave of shootings at its high schools. Each new eruption of violence brings comparisons to another murderous rampage - at Columbine High School in Jefferson County, Colorado.

It's been two years since Columbine, and today, many people - especially some parents of the murdered children - still believe the worst school massacre in American history might have been averted if the Sheriff's Department and school authorities had done their jobs.

60 Minutes has been investigating the shootings at Columbine for the past six months, and has found new and surprising information about what happened there. Some of that information was in the Sheriff's files - undisclosed - until CBS News went to court to have it released. And some of it comes from two former security officials at the school district who say that eight months before the shootings, they developed a plan that they say might have prevent the killings, a plan that they say the school all but ignored.

On April 20, 1999, 18-year-old Eric Harris was in the garage of his home, filling duffel bags with bombs and rigging weapons in his trenchcoat. A few miles away, 17-year-old Dylan Klebold was preparing his own weapons. Then they drove to Columbine High School.

It was a warm spring day, and a lot of students there were eating lunch outside. Danny Rohrbaugh, a freshman, was outside with some friends. It was 11:19. For the next few minutes, the students in the cafeteria heard gunfire. As a school security camera recorded them, some of those students looked out to see Danny lying dead on the sidewalk. He'd been shot three times. The attack on Columbine had begun.

At 11:23, as students hid under tables, a cafeteria worker was already on the phone with a 911 operator.

Just outside the cafeteria, Harris and Klebold killed two students and wounded six more. Then they turned away from their victims and headed for the school's wst entrance. As the gunmen headed into the school, business teacher and coach Dave Sanders rushed through the cafeteria, telling the remaining students to stay down, then headed upstairs to help others. As he turned a corner, he was shot.

"He just had a great heart for kids," says Rich Long, his friend and fellow teacher. Bleeding heavily, Sanders staggered into a science room.

Art teacher Patty Nielson was on hall duty just inside the west doors when she saw Eric Harris. She ran inside and called 911. The dispatcher told her that help was on the way.

Police were at the school right away. Within five minutes of the first shots fired, the sheriff's deputy assigned to work at the school was in the west parking lot. He exchanged gunfire with Harris who retreated into the school. That deputy was soon joined by six other policemen who took positions around the building. None of them entered the school, where Harris and Klebold were heading toward the library, shooting in the halls and throwing bombs into the cafeteria below. They walked into the library and began shooting students.

Among those killed there was Sophomore Kelly Fleming. Her parents, Don and DeeDee, say that the police should have entered the school earlier.

"There was no one in that school that had a gun other than the two killers," says DeeDee. "And no one pursued them. No one tried to engage them."

"For almost 20 minutes she waited. Twenty minutes, that's a long time for someone to have the opportunity to come in and make a difference."

The Jefferson County Sheriff's Office declined to speak with us, but in a letter, Sheriff John Stone described the Columbine attack as a "unique set of circumstances, the magnitude of which no one had dealt with before." He also cited some of the obstacles that kept his men from entering the building right away - including bombs, booby traps, and a lack of information about how many gunmen were in the school.

Other parents are also angry. "They're listening to kids getting shot and murdered inside the library over a 911 call and their job is to protect people," says Bruce Beck, the stepfather of Lauren Townsend, another student who was killed in the library.

In his letter, Sheriff Stone said that by taking positions around the building and waiting for SWAT teams to arrive, his officers were doing what they were trained to do. He said his officers "responded quickly, returned fire, deployed appropriately and safely extracted hundreds of trapped and terrified students and teachers." He also asked us to talk to Larry Glick, who directs a national organization that trains SWAT teams.

"They believed that they really had six to eight armed individuals inside there," says Glick of the police outside the school. "And if you're in those shoes of those officers, they felt that it was more reasonable to wait until additional personnel responded to move in."

Harris and Klebold then left the library and walked downstairs to the school commons. They were in no hurry. Harris stopped for a drink of water. Klebold wandered through the cafeteria, then lobbed a pipe bomb toward the window. It started a fire that could be seen by police officers outside the school.

When student Evan Todd came out of the school, he told police that there were wounded students in the school. He even told them how he had come out of the school. But no policeman went in that door, the shortest route to the library and to the science room, where Dave Sanders lay wounded. When Todd came out that door, there were at least 20 police officers surrounding the school. But by the time the first SWAT team was assembled and geared up to enter the building, it was 12:06 - 47 minutes after the shooting had begun. That SWAT team entered on the side of the building farthest from Dave Sanders, and from the library, where some survivors lay hidden among the dead.

By the time Klebold and Harris committed suicide at 12:08, at least 75 police officers were surrounding Columbine High School. The first SWAT team had been in the building only two minutes. It would be nearly three hours before they would know the gunmen were dead. As the day wore on, hundreds of police and rescue workers responded to the Jefferson County Sheriff's Department's call for help at Columbine High. Throughout the day, nearly a thousand police officers and rescue personnel from 47 agencies arrived at the scene. Many of those officers spent the entire day with nothing to do, waiting for an assignment from commanders on the scene.

While the crowd of reporters and worried parents grew outside the school, students and teachers in Science Room Three struggled to get help for teacher Dave Sanders, who had been bleeding profusely since he was shot at 11:26.

Melanie Poleshook, a sophomore, was in the room with him. "There seemed like there was a lot of officers walking around outside with nothing to do," she says. "And I don't know why they couldn't have sent maybe a few more people directly to come to our room."

Just before noon, Mike Rotole put a sign in the window. It said, "One bleeding to death." The Jefferson County Sheriff's command post was well aware of Dave Sanders' condition and where he was. Since 11:42, a teacher in the room with Sanders had been on the phone with operators at Sheriff's headquarters. And once Mike Rotole put the sign in the classroom window, radio calls started coming from officers urging the command post to rescue him.

At 1:10 PM - nearly two hours after the first shots were fired - a SWAT team finally entered the west side of the school building, where injured victims were waiting for help. Immediately they faced a maze of flooded rooms, fire alarms, and smoke. But worse than that, according to members of that SWAT team who asked not to be named, the command post never told them there were injured victims in te library or the science rooms.

At the same time, police dispatchers were telling the teachers and students with Dave Sanders that help was on the way.

"They'd say "Oh we'll be here in like 20 minutes,'" says Mike Rotole, a student who was in the room with Sanders. "So we'd, you know, get ready and lay there. And then no one would come." Rotole says this went on for three hours. Sanders was conscious almost the entire time.

As Dave Sanders lay bleeding, SWAT officers directly below him were evacuating classrooms full of children stranded on the first floor. Then they had to escort those children out of the cafeteria, past the dead bodies of their classmates, and on to safety.
Larry Glick, an expert on SWAT tactics, says it was required procedure at that time for SWAT officers to clear each room before moving on to the next.

For two and a half hours, the first SWAT team cleared classrooms on the side of the school farthest from where most of the shooting had taken place. A second team evacuated students and staff from the rooms around the cafeteria. When the Sheriff's command post finally told that SWAT team to look for Dave Sanders - they didn't know where to go.

SWAT officers finally reached Dave Sanders in Science Room Three at 2:42 - more than three hours after he'd been shot. They evacuated the kids right away, but held Sanders there to wait for a paramedic. That paramedic didn't arrive for another 42 minutes.

"We said 'Well can we carry him out, you know, let us carry him out,'" Rotole says. "And they said 'No, we need to get you out safely. And there's paramedics on the way right now.'"

But by the time a paramedic finally got to Dave Sanders, at 3:24, he was already dead. Sanders was the last of 15 people to die at Columbine that day. Twenty-three wounded were taken to hospitals. Six had brain or spinal injuries. Several nearly bled to death. Doctors at six hospitals worked on wounded children all through the night, and saved every one of them.

Did authorities miss red flags that might have helped them avoid the tragedy? Read Part II