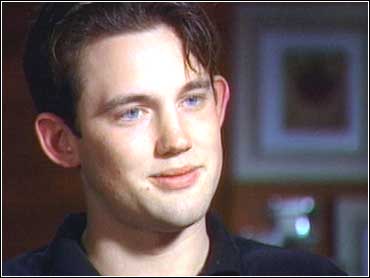 When Morley Safer first interviewed Adragon De Mello for 60 Minutes in 1987, the 10-year-old's father thought he was a genius. The boy, known as A.D., was in college because his father said there were no schools, public or private, that could challenge his son's intelligence.

But A.D.'s road to a higher education was a rocky one, and so was his life at home, where the pressure to succeed often became overwhelming. Before finding out how that 10-year-old is coping as a 23-year-old, review the profile of the boy 13 years ago.

On campus, A.D. De Mello resembled somebody's little brother who had come to visit and lost his way.

But this fellow was a full-fledged sophomore at Cabrillo College, a two-year community college in Santa Cruz, Calif. He took a much heavier workload than most college students - 21 hours a week in physics, political science, calculus, astronomy and meteorology.

"I like doing the things they have in college, like finding - doing calculus formulas and finding out how the weather works, finding out what the real raindrop looks like," he said, adding about the raindrop that "Instead of being a nice circle, it's - instead, it's a big, bulgy blob."

A.D.'s life was orchestrated by his father, Agustin De Mello, who took on his son's life as a full-time career. His main income, he said, was a settlement from an auto accident. They lived quite modestly, but the father had big plans.

"He can probably earn doctorates...in several areas - physics, astrophysics and science education," said his father, Agustin De Mello. "And probably by the time he's 16 or so, start teaching."

"At that moment that he's on that idea, his mind is completely there. And that's why he absorbs it. That's why it stays," Nolthenius added.

Agustin De Mello has always claimed his youngster was no ordinary child. "Perhaps," he once wrote, "this child might follow in the steps of da Vinci or Einstein."

When A.D. was in nursery school, the curriculum was inadequate, according to his father. Additional work was added at home.

"I was reading to him," his father recalled. "I had him watching educational programs on television. He took a great interest in them, and, of course, music."

"And he had a great affinity for...all the classical composers," said Agustin De Mello, who introduced his son to great musicians from very early on.

When asked if he misse not having kids his own age around, Adragon responded, "Sometimes yes and sometimes no."

"I feel kind of strange being around adults all the time and not being around children my own age," he admitted.

Other kids didn't usually come around, Adragon added, indicating that he hadn't gone to a kid's house to play in a long time.

When it comes to A.D.'s schoolwork, his father sometimes pushed him to study harder, the youngster said.

"I just have to," said young Adragon. "And if my father doesn't push me that hard, usually my grade's not as high as it was when he did push me harder. He makes me do a calculus problem five times over, and then I know it by heart." That is even if he got the answer right.

"I have a lot of hope for him because I know if I were his age and if I'd been going through what he's going through, I think I'd be a lot less open and bubbly and - and just out there - than he is," said Prof. Nolthenius.

"He's got a lot of strength," the professor added, noting that he thought the father was pushing him too hard.

To young A.D., his growing up experiences reminded him of raising hamsters. "There would be two hamsters, and there'd be another little hamster, and one time I saw one tugging it this way and another one tugging it this way," said A.D. "It's like one person wants you to do this, and another person wants you to do that, and you're just stretched and you don't know what to do."

"The end result will verify, justify my - my particular action," declared Agustin De Mello, referring to how he thinks his son will "benefit our civilization" in the future.

A.D.'s mother remained something of a mystery. Mr. De Mello said she left them; others said she cared deeply about the boy. 60 Minutes tried to find her, but she indicated she did not want to talk.

Clearly, the father was pushing his son way too hard. It turned out CBS News didn't know the half of it.

"It didn't quite work out that way," says A.D. "A lot of the dreams that people heard about, of winning a Nobel Prize and going to doctorate school, is mostly my father....It wasn't something I cared about doing."

In fact, it was never his idea, he says.

What he is doing today is his idea: training to be an estimator for a commercial painting company. There are no Nobel Prizes in this line of work - no sure pathways to the cover of Time magazine.

His job does demand a certain accuracy so his degree in mathematics from the University of California at Santa Cruz, gained when he was only 11, does come in handy.

But was he really a genius or was he just a collector of information?

"Genius?...I don't thinso," A.D. says. "Later on in life I realized that a lot of other kids put in the same situation probably could have done the same thing. And - so I don't think that makes me a genius."

His mother, Cathy Gunn, didn't think so either. She was horrified by the father's obsessive pressure on their son but there was nothing she could do about it, she says. Remember: In 1987, she was not interviewed.

"For example, when (the team) came out originally from 60 Minutes, I was not allowed to be there, had to be somewhere else," she explains.

His father had told him not to even mention his mother, A.D. says. "He didn't want me to talk about her, and he didn't want her talking to anybody either."

Agustin De Mello would go to any lengths to get his way, according to Gunn. "He threatened to kill himself in front of me. He did that in front of A.D. in order to get him to do things," she recalls.

"When he got angry, he was really scary," says A.D. "That was one of the things I was real angry about when I was older, is why...he treated me like that."

Agustin De Mello scared A.D.'s mother so much that she went into hiding. She tried to gain legal custody through lawyers - but to no avail.

"She feared more for my mental - my mental safety," A.D. says. "She didn't want me getting pushed around."

"I really, really missed my mother because I didn't see her much at all," he adds. "She finally took me out, I think, because of that."

As Gunn's fears grew, she alerted the police, telling them of a cache of guns DeMello kept. They stormed the house. Agustin DeMello, claiming to have a heart attack, was wheeled out, examined, released, then arrested for suspicion of child endangerment. The case never went to trial because court-appointed experts thought that having A.D. testify against his father would be too stressful.

"I went back to junior high, actually," A.D. says. "It was nice because no one knew who I was. And that's - I was worried about that. I was worried that kids would treat me differently because of that."

His academic path was rather unusual. He went from primary school to university - and then from university to junior high.

"I didn't take math in junior high," says A.D., explained that he was rather advanced in the discipline. "But I did take all the other classes. I took English classes and history classes and science classes, etc....But I still had fun doing what I was doing and working with the other students."

He even made it to Little League.

"I remember the first couple o games I played I threw the bat every - every time," he recalls. "Every time I swung the bat, it let loose, and I ended up hitting a coach in the shoulder one time."

In junior high nobody knew who he was because he changed his name. "I loved James Bond," he says. "And I thought what better to have than James. And then I went by my mom's last name, Gunn."

After junior high, though, his secret was out.

"At my junior high graduation, the local newspapers published a front-page article," he says. "I was really upset because I didn't want this extra burden. You know, I was trying to have fun, you know, meet new people. And now, all of a sudden, everybody thinks I'm something that I'm really not."

"People perceive me as a human calculator....They'd walk up to me and ask me to solve these problems just out of the blue. And I wouldn't," he says.

Today, nobody is thinking about him as a human calculator, though. He has a large group of friends, lives in his own apartment and loves his job. He sees his mother and father often. (His father said he was too sick to appear on 60 Minutes and claims he had a heart attack.)

Does A.D. ever think about where he might be today if he stuck it out?

"I think I would have stopped," A.D. says. "I really do. Because I was already getting to that point where I was - I wanted to - I had enough. And I- I didn't want to go through it anymore."

Have his unusual experiences growing up in any way affected his ambition? For example, does he want to be a superior paint estimator?

Who's To Blame For Sub Accident?

Love In The 21st Century